A Myanmar project to build disaster monitoring and early warning capacity to protect the country’s 53 million people who call the country home entered its final phase, where local disaster management experts will continue the advances made in the past 27 months.

The Pacific Disaster Center (PDC) focused the final workshop of the USAID Office of Foreign Disaster Assistance (OFDA)-funded project on institutionalization and sustainability of the project outcomes, with training on standard operating procedures and system administration as well as review of staffing plans and more. Nearly 40 representatives from 18 Government of the Union of Myanmar departments led by the Department of Hydrology (DMH) and Department of Disaster Management (DDM), along with ASEAN Centre for Humanitarian Assistance (AHA Centre), UNOCHA, and other NGOs attended the final workshop—the culmination of a week of activities focused on institutionalization and sustainment of project activities.

“Helping our individual ASEAN Member States develop disaster management capacity is crucial to the region’s success overall. It is reflected in the AHA Centre’s moto ‘One ASEAN, One Response,’” said Lawrence Dimailig, AHA Centre’s Disaster Monitoring and Analysis Officer. This engagement in Myanmar dovetails with a larger development to help ASEAN Member States (AMS) sustain and improve disaster management not only within each country, but between countries, in one of the world’s most hazard-prone regions, he added.

Under this project, Myanmar officials received training on the use of DMRS in 2017, with a total of 11 sessions reaching nearly 200 members of Myanmar’s disaster management community conducted over the past two years. One final, advance training was conducted with senior government staff who will take responsibly for adding Myanmar-specific Hazards to the DMRS system. Immediately following this final training, DMH staff began populating DMRS with ongoing Myanmar flood and storm Hazards, marking the first time any ASEAN Member State has added Hazards to the regional system.

Even before GoUM staff were granted access to add Hazards to DMRS, the system had been providing support to disaster operations in the country. “DMRS has been an effective tool for not only current hazard planning and monitoring, but also for disaster response,” said DMH Director General Dr. Kyaw Moe Oo.

For example, Director General Oo said DMRS was the main platform for situational awareness during widescale flooding in 2018, when events were reported and monitored within DMRS, allowing decision-makers access historic satellite-observed flood data in support of response efforts.

In addition to flood data, project activities over the past 27 months focused significantly on enhancing the DMRS system for use within Myanmar, including the translation of the system and associate SmartAlert notifications into the Burmese language and the integration of national baseline and critical infrastructure data.

While summing up success of this project, PDC Deputy Executive Director Chris Chiesa said “DMRS has now become a powerful tool to support disaster management from planning and mitigation to response and recovery. As the project draws to a close, he added “DMH has worked closely with PDC to develop procedures and staffing capacity to support the effective use of DMRS within its disaster management context. These efforts will assist in the long-term sustainability of the project outcomes and ensure that DMRS can continue to Myanmar’s disaster risk reduction goals.” 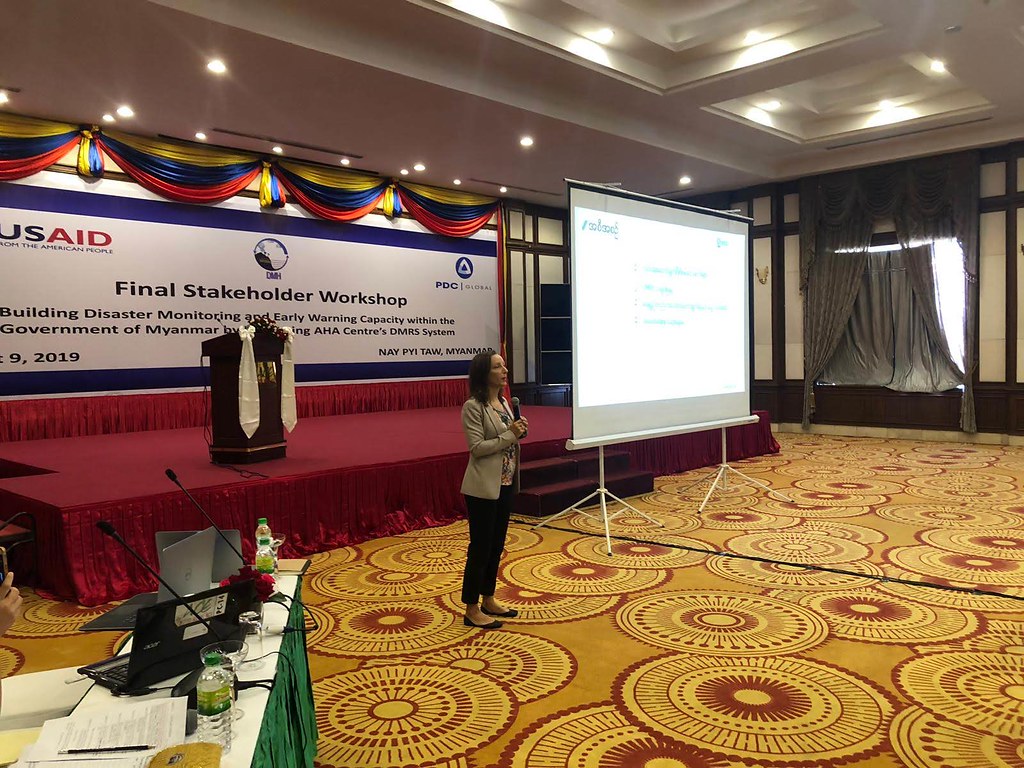