Faced with ongoing threats from extreme cyclones, earthquakes, floods, landslides, and wildfires, the Government of Myanmar continues to advance initiatives to protect the 53 million people within its borders. Most recently, Myanmar officials reached a new milestone aimed at increasing national resilience and disaster risk reduction capacities through a joint endeavor with Pacific Disaster Center (PDC).

On January 23–24, 2018, at Myanmar’s Royal Ace Hotel in the capital city, Nay Pyi Taw, 41 government officials from the Department of Meteorology and Hydrology, the Relief and Resettlement Department, the Agricultural Planning Department, and the Department of Hydropower—among other key stakeholders—attended training provided by PDC on making use of the capabilities of the Association of Southeast Asian Nation (ASEAN)’s Disaster Monitoring and Response System (DMRS).

DMRS was built by PDC on its powerful DisasterAWARE platform and deployed in 2012 through funding support from USAID. It has since supported the disaster management and risk reduction needs of ASEAN Member States, including Myanmar. Under the project between PDC and Myanmar, also supported by the USAID Office of Foreign of Disaster Assistance (OFDA), PDC is collaborating with disaster management officials to expand ASEAN’s DMRS capabilities to better support its use by Myanmar for disaster risk reduction. Project activities include incorporation of Myanmar national data about flood prone areas, earthquakes, infrastructure, population information, and more. The project also intends to:

Speaking about the significance of the new project, PDC’s Deputy Executive Director Chris Chiesa said, “We are enhancing AHA Centre’s decision support application as well as the capacity of Myanmar’s disaster management staff to put it to operational use. Our goal— and that of USAID/OFDA— is to help the Government of Myanmar to reduce devastating disaster losses by ensuring the effective application of information, processes, and tools throughout all phases of disaster management.” 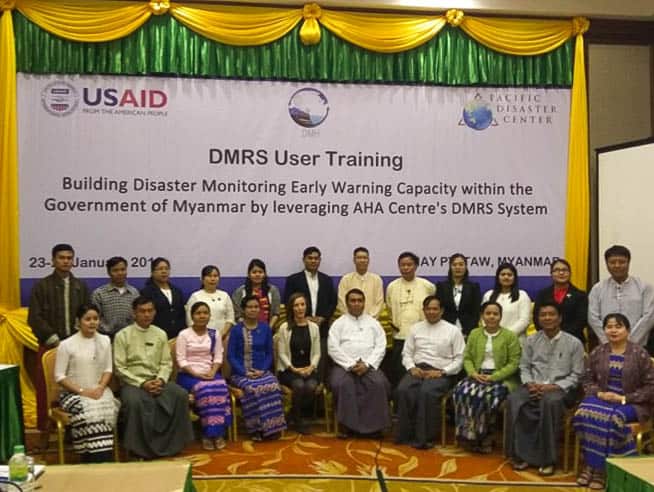