Response to destructive earthquake in Indonesia

In the early hours of December 7 (local time), a 6.5 magnitude earthquake struck Indonesia’s Aceh province on the island of Sumatra. The shallow earthquake caused significant damage, claiming the lives of at least 103 people, leaving more than 84,000 people displaced, and damaging 249 buildings.

Many families living in the area damaged by this earthquake—or their loved ones—were there 12 years ago, in December 2004, when the Great Sumatra Earthquake and Indian Ocean Tsunami struck. Then, this part of Aceh was one of the most devastated impact zones. While it is still not possible to predict earthquakes, of course, Indonesia’s capacity for response to destructive geological events has improved remarkably.

Following this event, InAWARE—Indonesia’s early warning and decision support system developed by University of Hawai‘i: Pacific Disaster Center (PDC) and powered by DisasterAWARE—was immediately ready to support response efforts. After the earthquake struck, InAWARE received and automatically processed both the USGS bulletin for the event and locally developed information from Badan Meteorologi, Klimatologi, dan Geofisika (BMKG), including from the Indonesia Tsunami Early Warning System (InaTEWS). Within minutes, InAWARE registered the hazard and sent out SMS and email notifications to subscribed users, including the emergency operations staff of Indonesia’s national disaster management agency, BNPB.

InAWARE also allowed responders to view a ShakeMap, which is a model of the zones of shaking intensity around the earthquake’s epicenter. This information is especially valuable to decision makers and emergency responders when displayed with other key data layers such as population density (How many people are in severely impacted areas?) and critical infrastructure (How can responders best reach them?).

As part of the response to this earthquake, Humanitarian OpenStreetMap Team (HOT) deployed volunteer mappers in the affected area, and PDC joined the effort. Infrastructure and features newly mapped by the volunteers will be incorporated into InAWARE.

As the response operation began, information about the impact of the quake and needs of the affected communities was collected, and the resulting information products were shared with the disaster management community through InAWARE by BNPB, PDC, and BMKG.

BNPB and PDC have been collaborating to enhance Indonesia’s emergency management capacity since 2011. In 2013, with support from USAID OFDA, PDC began the development of InAWARE. Since its initial launch in January 2014, there has been a steady effort to train users, develop and exercise standard operating procedures, incorporate additional data resources, and institutionalize the use of InAWARE at national and provincial levels in Indonesia. A second phase, also funded by USAID and kicked-off in July 2016, will integrate flood data from social media and bring in primary data from new project partners PetaBencana and Humanitarian OpenStreetMap Team (HOT). Through these activities, PDC and BNPB leadership intend to further strengthen Indonesia’s ability to effectively respond to hazard events. 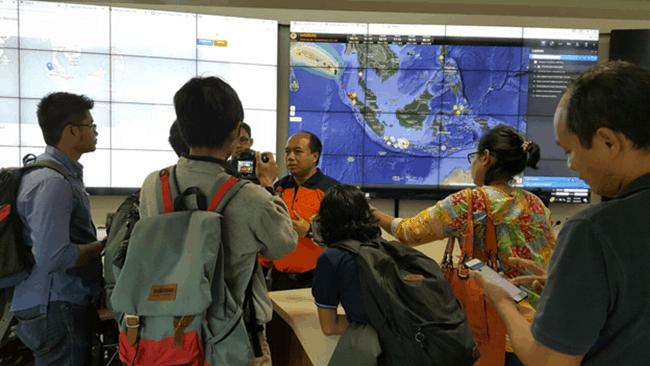 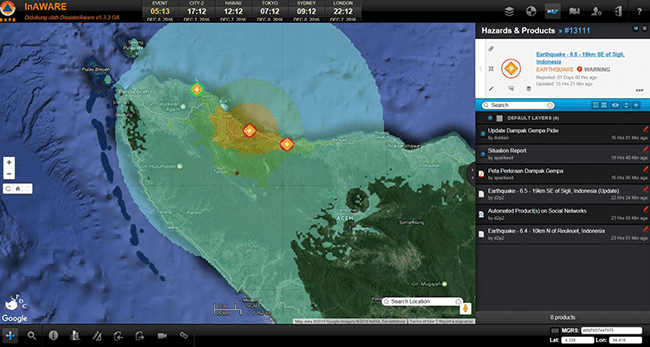