“Our Operations Center was able to utilize [PhilAWARE] during the Typhoon Odette (Rai) operations last December 2021. Since the system is web-based and accessible online, even work from home personnel were able to monitor the Typhoon using their individual PhilAWARE accounts and access information and data products.” 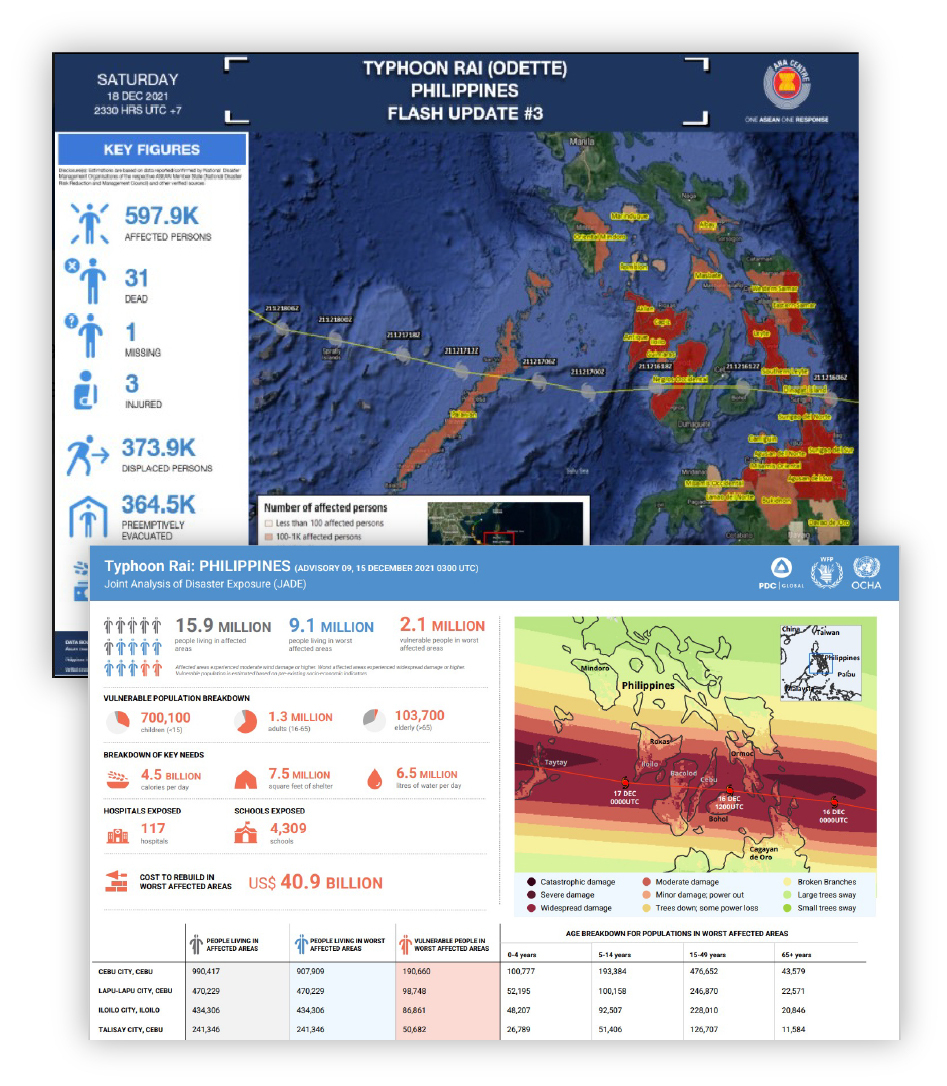 On Dec. 15, 2021, Tropical Storm Rai strengthened into a Super Typhoon faster than any other storm system in recent memory, going from category 2 to category 5 on theSaffir-Simpson Hurricane Scale in a matter of hours. The storm made landfall on the southern islands of the Philippines with violent force, leading to the evacuation of more than 400,000 residents, injuring at least 500 people, and causing 375 deaths, according to estimates from the Philippine Red Cross.

While the effects of Super Typhoon Rai—known as Typhoon Odette locally in the Philippines—were significant, the Philippine government’s preparation for, and response to the storm were enhanced by a newly deployed hazard monitoring and early warning tool, PhilAWARE. This system was recently developed by the University of Hawaiʻi’s Pacific Disaster Center (PDC), in partnership with the Philippines Office of Civil Defense (OCD). Based on PDC’s DisasterAWARE platform, PhilAWARE provides early warning and advanced modeling to support critical impact and potential needs information to aid rapid response.

Foreshadowing the importance PhilAWARE would play during response to Super Typhoon Rai, OCD’s Undersecretary Ricardo Jalad noted during his opening remarks at the Dec. 7 PhilAWARE handover ceremony that “this new platform will not just enhance our hazard monitoring and early warning but will even help us in seamless information sharing between disaster managers and decision-makers.” The system was implemented under OCD’s leadership in close partnership with the Philippine’s National Disaster Risk Reduction and Management Council (NDRRMC). Funding support was provided by the U.S. Agency for International Development (USAID)’s Bureau for Humanitarian Assistance (BHA).

PhilAWARE provides critical information for decision making including national and provincial data, and new risk and vulnerability data. OCD’s access to this data through the PhilAWARE system proved critical to their response to Super Typhoon Rai, helping responders understand the extent of the storm impacts. Additionally, the ability of users to upload and share information products within the system allowed for more effective coordination between response stakeholders.

People in the Philippines covered by PhilAWARE

Hazards reported and monitored via PhilAWARE

“While we were saddened by the death and destruction that Super Typhoon Rai left in its wake, the silver lining to this dark cloud was the support that PhilAWARE provided to OCD’s operation center and staff,” said PDC Deputy Executive Director Chris Chiesa. “It was heartening to hear how it improved their sharing of information within OCD and between NDRRMC agencies.”

PDC’s models and data sharing relationships provided critical, life-saving information to aid rapid response and helped decision makers anticipate what was going to happen, where, how bad the impact would be, and what type of humanitarian support might be needed.

This information was available within PhilAWARE, enabling the Philippine government to make swift decisions to evacuate residents, suspend work and school, ground ferry and cargo vessels, and cancel domestic flights.

Want to speak with someone about our capabilities or DisasterAWARE technology?