The United Nations Office for the Coordination of Humanitarian Affairs (UN OCHA) and Pacific Disaster Center (PDC) are joining efforts to enhance humanitarian assistance for natural disasters worldwide. While by no means a new partnership, PDC and OCHA are breaking new ground, codeveloping analytical products supporting OCHA’s Regional Office for Asia and the Pacific (ROAP). Discussions are also underway to produce similar products for its Regional Office for Latin America and the Caribbean (ROLAC). The new products are designed to quickly inform humanitarian assistance providers with critical information about the potential impact of disasters—highlighting needs for vulnerable populations during response operations. 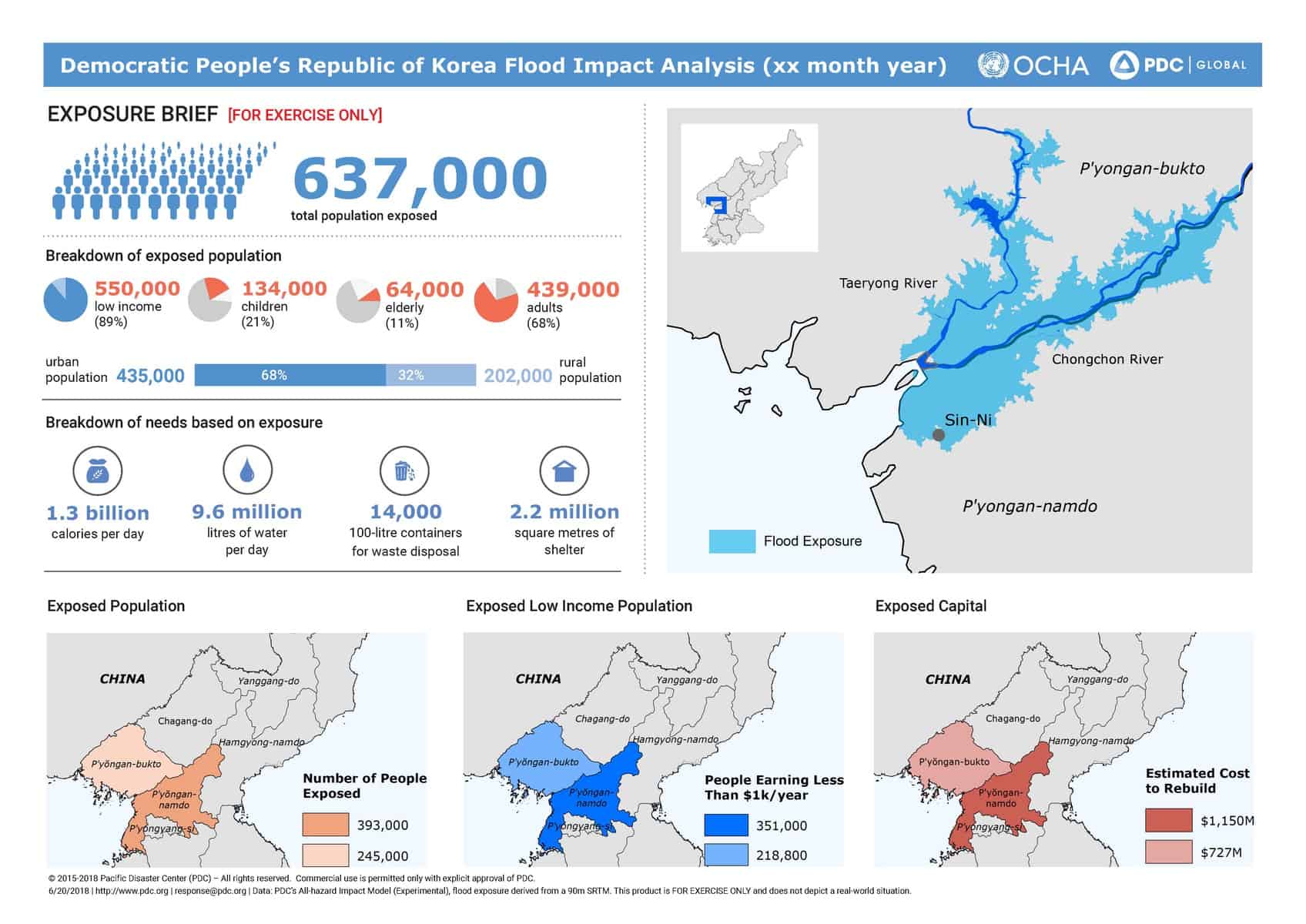 With data provided by both UNOCHA and PDC, this joint exercise product, depicting simulated flood impacts within the DPRK was showcased during a recent UNOCHA workshop.

Mr. John Marinos, Regional Information Management Officer at ROAP, said he is pleased to be expanding upon on the 10-year partnership between the ROAP and PDC to produce rapid disaster impact analysis products. “By combining our expertise and data with PDC’s modeling capabilities, we can estimate, as soon as possible, who is affected by a disaster and where. By estimating the number of people likely to be in need of assistance, we can reduce the time between a disaster occurring and launching an informed response to support people in need,” said Marinos.

A formal agreement has also been finalized between PDC and OCHA to strengthen global partnership networks for humanitarian assistance, planning, preparedness, and recovery. “We are very excited to be in partnership with our longstanding colleagues and friends at the UN,” said PDC’s Director of Disaster Services Dr. Erin Hughey. She said PDC’s work with the UN has included projects with OCHA, World Food Programme (WFP), World Health Organization (WHO), Index for Risk Management (INFORM), as well as UN headquarters offices who have called on PDC’s expertise in disaster management, data, and technology throughout the years. According to Dr. Hughey, OCHA has played a vital role in PDC’s mission to build international capacity through disaster preparedness and risk-and-vulnerability awareness programs. “We’ve had so many successful engagements with the UN, as reflected by our most recent work with the OCHA ROAP office and the team at INFORM. Together, with a unified approach, we’ll be able to provide the best, most timely information to aid the important, life-saving work happening all around the world.”

As an extension of the broader partnership initiative, PDC Disaster Management Specialist Todd Bosse recently participated in the 2018 Global INFORM Partners Meeting at the UN headquarters in Geneva to continue collaboration on risk assessment at the national and subnational level. “As a technical partner of INFORM, PDC is committed to ensuring the latest advancements in risk assessment methodologies are leveraged for disaster planning and preparedness worldwide,” said Bosse. He continued, stating that PDC and INFORM are exploring new channels to communicate risk data so it can be more actively applied in disaster management decision making.

While in Geneva, Bosse also met with Mr. Javier Teran and others on the OCHA Humanitarian Data Exchange (HDX) team. As a new partner of HDX, PDC is leveraging new OCHA data for its products and extending access to PDC’s critical data catalogue to members of HDX. When asked to reflect about the future of the partnership between PDC and the UN, Teran said, “I see nothing but exciting things to come. We’ve all heard the adage, ‘Information is power.’ When it comes to this partnership, it means the power to save even more lives and to reduce extended suffering from natural disasters.”