Dovetailing with more than a decade of successful achievements by PDC and BNPB, the MOU aims to further Indonesia’s independent disaster management capacities by engaging UGM. “Together Gadjah Mada and PDC are working to ensure that Indonesia has the necessary in-country resources, training, and national capacity to support ongoing advancements in technology, policy, and practices far into the future,” said Pacific Disaster Center Deputy Executive Director Chris Chiesa. Chiesa said that UGM is the optimal partner to provide that support because of its specialization in disaster risk reduction science (DRR), research, and technology.

According to UGM Rector Ir. Panut Mulyono, UGM is the largest and the best national university in Indonesia. He considers cooperation with PDC and BNPB to be of great strategic importance in significantly reducing the risk of disasters in Indonesia, stating that, “In such collaboration, UGM commits to contribute our knowledge and experience through the Education and Research Program for Community-based DRR. We are eager to enhance our existing capacity for Disaster Mitigation Technology through our involvement in the InAWARE Project.”

The MOU is just one of many new initiatives following successful deployment of  InAWARE by PDC and Indonesia in 2014. InAWARE is a custom decision support system built on PDC’s powerful DisasterAWARE platform in partnership with BNPB. Speaking of the importance of the InAWARE project and the new MOU between UGM and PDC, BNPB Chief Willem Rampangilei said, “The partnership with PDC and our nation’s very own Universitas Gadjah Mada will create a vital pathway for BNPB to sustain and advance all of the life-saving technologies and programs we’ve worked together so hard to put in place.” Indonesia’s BNPB will continue to work with PDC through the current technical arrangement and beyond, allowing all parties to leverage university services and expertise.

Dr. Dwikorita “Rita” Karnawati—first female rector of Gadjah Mada (2014–2017) and currently an Engineering Professor—has been a key PDC collaborator for more than five years, and partnered with the Center in creating an important project aimed at making disaster risk reduction activities sustainable by linking community-based projects with national and regional programs. Understanding that sustainability does not come naturally to even the most essential achievements, she is clearly an excellent choice to oversee the long term health of InAWARE.

“UGM considers that collaborative actions among key partners in DRR is a ‘must’ to accelerate the achievement of a safe, resilient, and sustainable society as outlined by the Sendai Framework for Sustainable Development Goals,” said Dr. Dwikorita “Rita” Karnawati. She continued, “We consider that PDC is one of our most strategic partners for this mission of accelerating DRR goals. We are really eager to collaborate with PDC to integrate UGM Landslide EWS into BNPB’s InAWARE, as well as mainstream and magnify the human and social dimensions to sustain DRR in Indonesia.” 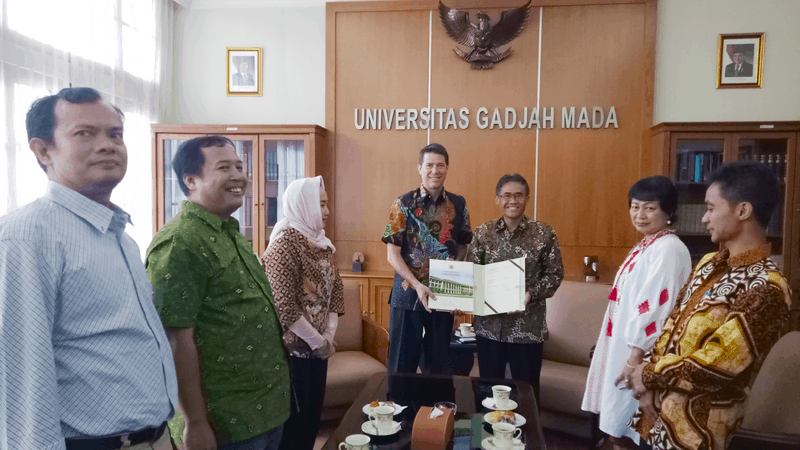