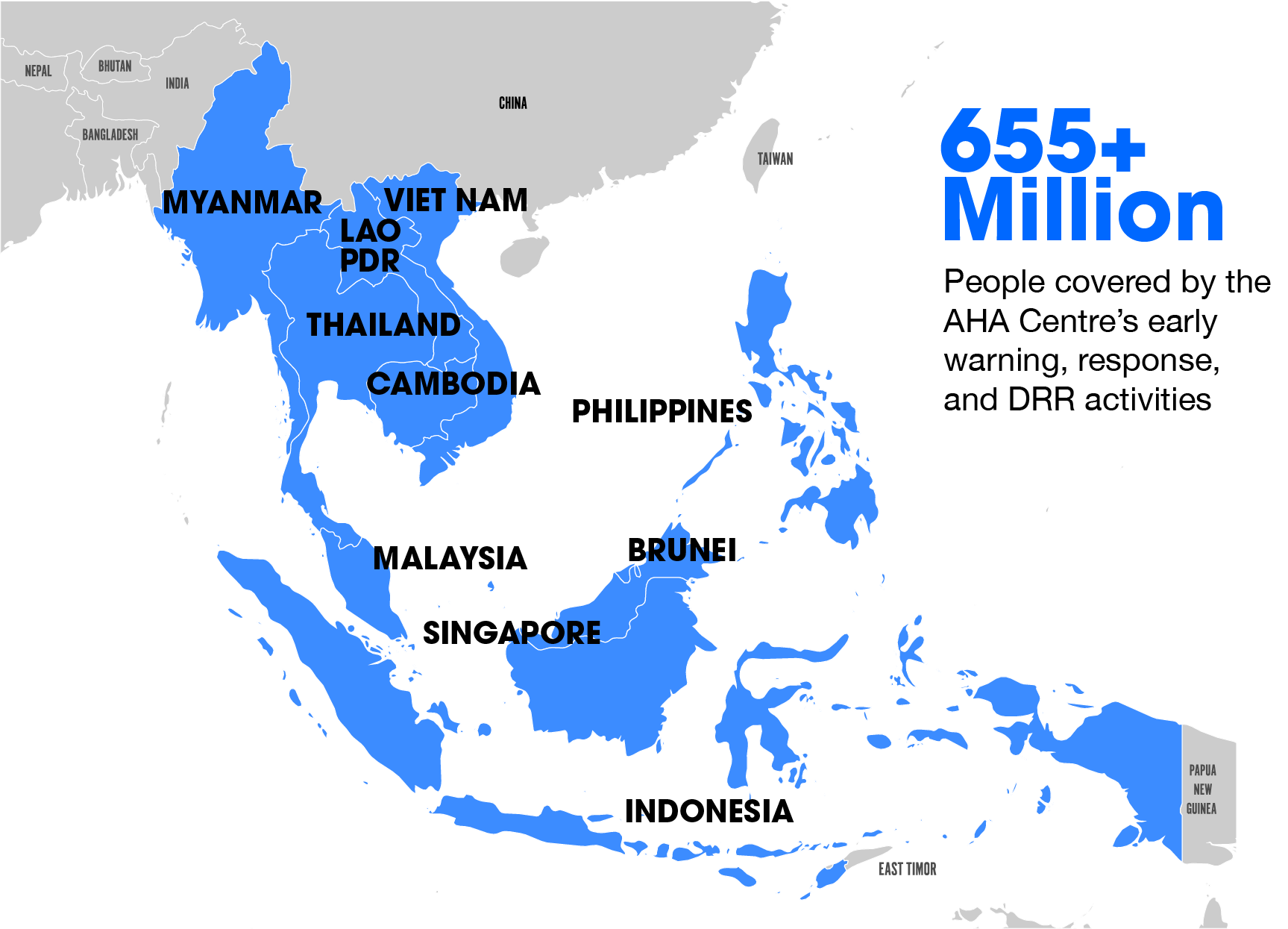 There are more than 655 million people living in Southeast Asia—one of the most disaster-prone regions of the world. Life within the region is becoming even more challenged by a notable increase in climate-driven disasters which include floods, landslides, wildfires, and super typhoons. Migration and displacement from these events further threaten peace, security, and safety for countries within Southeast Asia. Yet, the disaster risk reduction work being done at the ASEAN Coordinating Centre for Humanitarian Assistance on disaster management (AHA Centre) is helping to divert the worst of these potential impacts. Situated perfectly in Jakarta, Indonesia, the Centre serves as the disaster risk management and response arm for the region. It is equipped with a world-class set of evidence-based tools to fulfill its mission to save lives, alleviate suffering, and help guide better decisions for a safer, more resilient future.

“DMRS is powered by PDC’s DisasterAWARE technology and has been internalized and mainstreamed for the past nine years into our day-to-day disaster monitoring and response operation.” 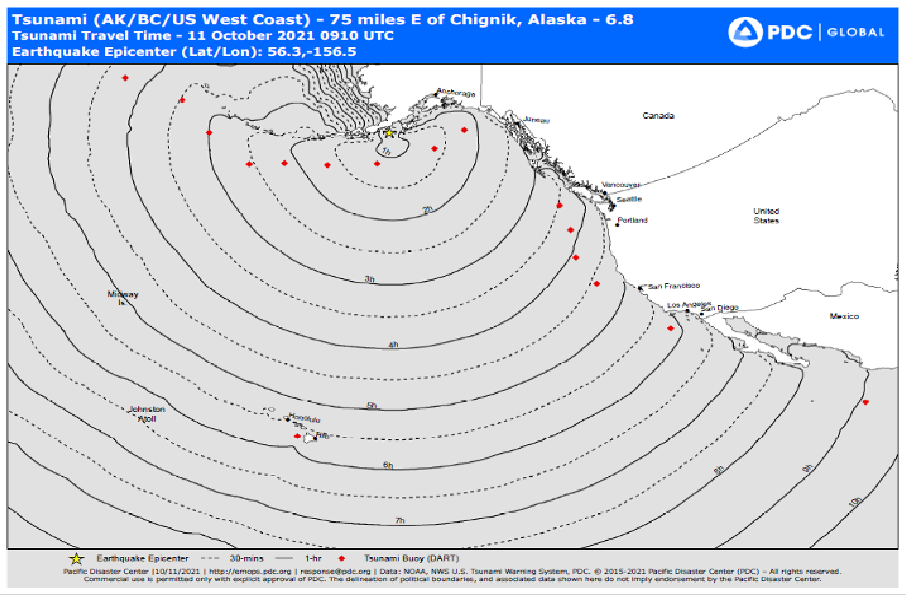 The AHA Centre is no stranger to disasters. It was formed in the wake of the M9.0 Indian Ocean earthquake and tsunami of 2004, which led to the catastrophic death of more than 200,000 people regionally. More than 160,000 people perished in Indonesia alone. Today, the region is equipped with DMRS through the AHA Centre which provides robust accurate tsunami early warning and tsunami travel time modeling in near real-time.

The AHA Centre serves all 10 member states of the Association of Southeast Asian Nations (ASEAN) and has helped raise and equalize disaster risk reduction capacity throughout the region for more than a decade. This is especially true for nations with smaller economies and lower capabilities. The Centre’s primary strategy has been to leverage advanced technologies and key partners to help fill critical information gaps for effective decision making.

The daily operations of the AHA Centre and its efforts to build regional and national resilience rely on its powerful Disaster Monitoring and Response System (DMRS), deployed at the Centre in partnership with Pacific Disaster Center (PDC) in 2012. Powered by PDC’s DisasterAWARE® platform and all-hazards impact model, the DMRS system is the most powerful and comprehensive early warning and decision support technology for disaster risk reduction in the world. DMRS is fully automated with the most authoritative and scientifically-validated data, customized to provide all 10 ASEAN nations with critical early warning, multi-hazard monitoring and predictive hazard impact analysis.

This is crucial in helping to protect the 655 million people who call the ASEAN region home. 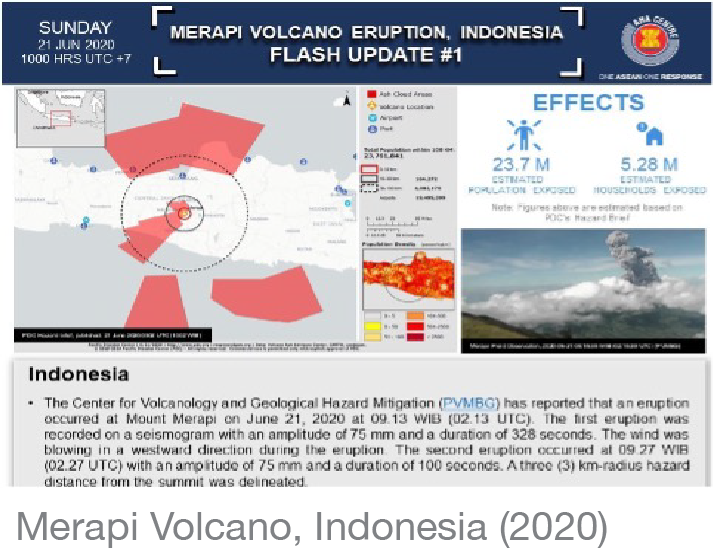 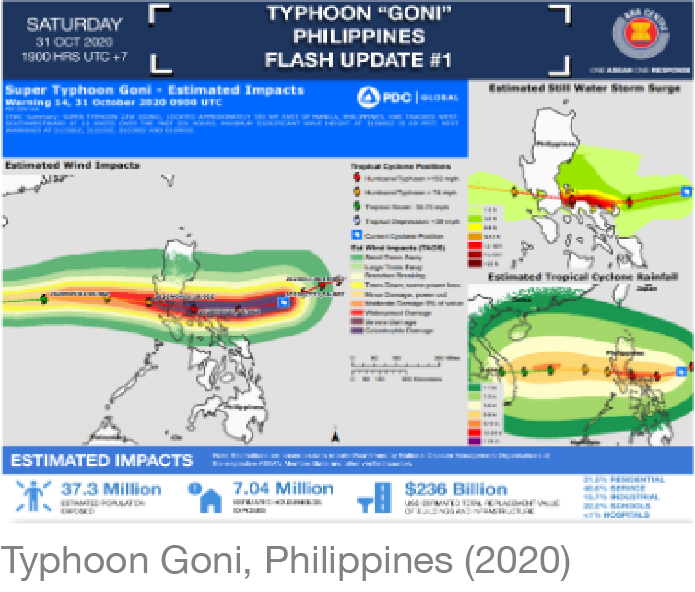 DMRS was launched in 2012 through funding support from USAID’s Office of Foreign Disaster Assistance and has been used operationally ever since. Infrastructure, population and socioeconomic information available within DMRS, along with the automated hazard alerts and impact assessments specific to the ASEAN region, provide the AHA Centre with unmatched regional hazard monitoring and response capabilities 24 hours a day, seven days a week. Additionally, DMRS is synchronized with other regional custom DisasterAWARE systems to allow for the sharing of important hazard information between the ASEAN member states to further support the regional approach to disaster monitoring and response.

DMRS was used significantly in monitoring a series of Tropical Cyclones that formed in the ASEAN region between May and November 2020. One such event was Typhoon Vamco which made landfall first in the Philippines and then in Viet Nam in November 2020. As Typhoon Vamco started to develop into a significant system with potentially catastrophic impacts, the AHA Centre put to work some of the most powerful features of DMRS which include automated situational awareness products and near real-time modeled impact analysis via the system’s advanced Hazard Brief predictive analytics report.

Hazard Brief (pictured right) depicts the area potentially affected by the storm event as well as the estimated impacts to exposed infrastructure and population, including the most vulnerable groups affected: children and elderly. This type of information is vital for AHA Centre operations as “it really helps us in estimating the potential loss and humanitarian needs resulting from the hazard,” noted Sadhu Zukhruf Janottama, a disaster monitoring and analysis officer at the AHA Centre.

Hazard Brief utilizes PDC’s All-Hazards Impact Model (AIM) to estimate the impact to the populations and is updated automatically with each advisory issued by a scientific authority.

There is no other sytem available that can provide this type of highly accurate, near real-time anticipatory impact modeling for disaster management decision making supporting any type of hazard in the world. 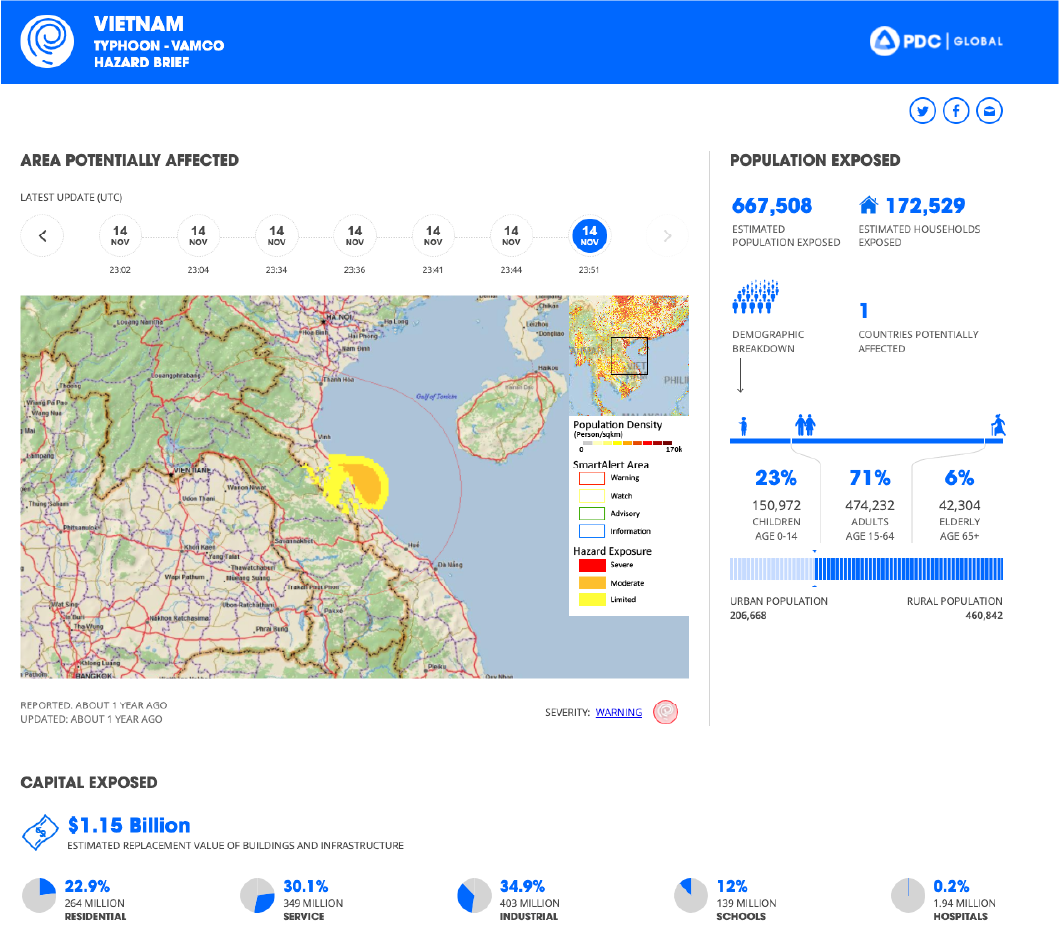 The AHA Centre’s operations depend on the robust analytics, critical data, early warning, and monitoring capabilities of DMRS as do leaders of ASEAN’s member states contending increasing frequency and severity of hazards in the region.

“We routinely use DMRS Hazard Brief information to populate our Flash Updates and Situation Updates, which are shared widely with partners. The information provided by the DMRS system is critical for regional planning, response and recovery coordination,” Janottama added.

Want to speak with someone about our capabilities or DisasterAWARE technology?