Nearly two weeks after Super Typhoon Haiyan overwhelmed the central Philippines, the international humanitarian community faces continuing challenges. According to situation reports from the United Nations Office for the Coordination of Humanitarian Affairs (UNOCHA), efforts are making headway, in Tacloban, the largest city hit by the typhoon. Humanitarian operations now extend to all barangays (smallest administrative units), most hospitals are functioning and some schools have opened. However, in Tacloban, as in other areas, logistical challenges with delivery of relief supplies and access to affected populations remain.

Commenting on the scale of the situation on the ground, Pacific Disaster Center (PDC) Senior Biosurveillance and Epidemiology Advisor Dr. Kyle Hathaway said, “Secretary Enrique Ona and the Philippine Department of Health (DOH), the World Health Organization (WHO), and the international community are making a tremendous effort to treat survivors injured during the storm, while working around the clock to keep common diseases associated with disaster at bay. The Philippines is facing tremendous challenges with damage to more than 40% of health facilities in affected regions, significant interruptions of sanitation services, and severe complications with access to clean water. There are concerns about diseases that were present earlier this year, including Cholera, dengue, and leptospirosis; and both the Philippine government and international partners are aware of the potential for imported cases of measles. Efforts are focused on controlling existing diseases, lack of access to medicine—combined with a need to ramp up vaccinations to avoid outbreaks, and ongoing surveillance to identify new infections before they spread.”

In order to capture the lessons of immediate response actions, provisions have been made for representatives from the Center for Excellence in Disaster Management and Humanitarian Assistance (CFE-DMHA), the Multinational Planning Augmentation Team (MPAT), Harvard Humanitarian Initiative, and PDC to deploy to the area in order to conduct a rapid response assessment. PDC Director of Disaster Services Dr. Erin Hughey left Hawaii for the Philippines on Wednesday, to assist with the joint assessment. To this end, PDC Executive Director Ray Shirkhodai said, “The Center will remain vigilant and actively involved in supporting relief and response communities, providing relevant situational awareness products for as long as needed. Furthermore, the results of the early assessments will contribute to and inform decisions regarding both current and future support for humanitarian assistance and disaster management efforts.”

PDC has produced a variety of situational awareness products to support responders, visualize impact, and identify areas that are in need of relief. Products include information about damaged or destroyed houses, and overall economic impacts to infrastructure and agriculture. PDC situational awareness products are based on official updates from the Philippines NDRRMC and are shared on PDC’s website, EMOPS, ReliefWeb, the Virtual On-Site Operations Coordination Centre (OSOCC), and All Partners Access Network (APAN).

David Day of Think Tech Hawaii recently interviewed Joy Santos, Vice Consul from the Philippine Consulate in Honolulu, for Asia Review. Day also invited Shirkhodai and PDC Director of Applied Science Dr. Heather Bell to help viewers understand what is happening in the aftermath of Haiyan. (The interview has been posted to YouTube.) The program, “Philippine Nightmare: Typhoon Haiyan,” covers the collaborative role PDC fulfills in supporting the decision-making process for responders on the ground. 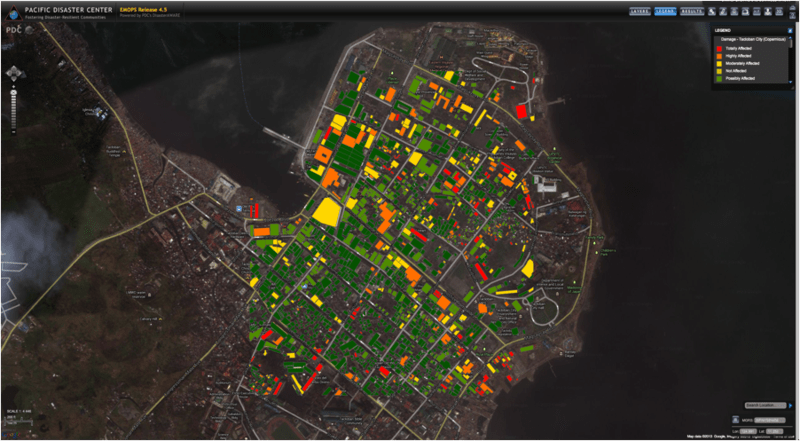