Following several consecutive years of serious hurricane impacts, The Bahamas launched an aggressive new program on June 26, 2019 to research disaster risk, preparedness, and climate change in partnership with Pacific Disaster Center (PDC)—a University of Hawaiʻi applied science and research center. The nation’s Deputy Prime Minister and Minister of Finance, the Hon. Kevin Peter Turnquest, delivered keynote remarks during the opening ceremony to uphold the importance of the partnership. He described the year-long National Disaster Preparedness Baseline Assessment (NDPBA) as an imperative step towards risk reduction and true sustainability for The Bahamas.

“We recall that within the past few years alone, The Bahamas has been seriously affected by at least three major hurricanes—all category four storms or above. The impact of Hurricanes Joaquin, Matthew, and Irma on The Bahamas has been reported by the United Nations Economic Commission for Latin America and the Caribbean to cost approximately 820 million dollars,” said Turnquest. He emphasized that such a significant cost to an economy like The Bahamas is unsustainable. “Through the NDPBA partnership, The Bahamas and PDC will work together to address the unique disaster risks and sustainability challenges of small island nations and states,” he said. He further noted that the baseline assessment creates an opportunity for The University of The Bahamas Small Island Sustainability Centre and Hawaiʻi’s Institute for Sustainability and Resilience to collectively study the most pressing questions and emerging threats related to climate change.

“Over the last 130 years, a 1.2 degree Celsius increase in temperature has led to a number of important impacts around world,” said Dr. Chip Fletcher during video lecture delivered remotely from the University of Hawaiʻi’s Institute for Sustainability and Resilience. According to Dr. Fletcher, temperature changes correlate with a 15-fold increase in flooding, a 7-fold increase in wildfires, extreme increases in hurricane impacts, floods, freshwater shortages, and a shortage in agricultural food production worldwide. “By 2050, the situation will grow to a very severe level,” said Dr. Fletcher who cited research projecting the population increase will lead to a 60 percent rise in demand for food staples, while at the same time a diminishing yield in production by 15 percent. “Where we have food and water shortages, we commonly have violent conflict and a rise in authoritarian governments,” explained Dr. Fletcher who said the U.S. military has been aware of the correlation for several years and views climate change as a major threat to global peace and security.

The kick-off workshop and knowledge exchange for the baseline assessment was co-hosted by the National Emergency Management Agency (NEMA), the Bahamas National Geographic Information Systems Centre (BNGISC), and PDC with funding and support from the U.S. Northern Command (USNORTHCOM). The event drew participation by nearly 100 representatives from across public, private, academic, and nonprofit sectors and was the beginning of cross-sectoral engagement planned throughout the assessment. Using scientific methodologies, the program will support The Bahamas’ Vision 2040 National Development Plan and international commitments to the United Nations’ Sustainable Development Goals and Sendai Framework for Disaster Risk Reduction.

“This international model for cooperation demonstrates how we can leverage shared resources and expertise to build capacities and strengthen stability. This initiative brings together our governments, universities, and public-private sector partnerships to cooperate on one of the most challenging issues of our time. By bringing together experts from across sectors, we can bridge gaps in knowledge to reduce risk and find solutions to responding to crises,” said the U.S. Embassy’s Charge d’Affaires Stephanie Bowers during her opening ceremony remarks.

NEMA’s Director Captain Stephen Russell added that, as a strong nation of united family islands, The Bahamas has leveraged its culture of resilience for hundreds of years to adapt to and shape its changing environment. “Through this longstanding partnership with PDC and the Baseline Assessment program, The Bahamas can take the next step in its journey of growth to address the challenges that we have yet to face,” said Russell who went on to explain that NEMA has partnered with regional and international agencies for decades to enhance mitigation, response, and recovery capabilities with the aim of long-term national resilience. “Over the past 10 years, the partnership with PDC has helped to establish a brand new National Emergency Operations Center, with trained and effective staff; it has helped to implement the policies and protocols to effectively utilize this resource; to improve communication between islands; and most importantly, to support our brothers and sisters on the family islands.”

“As The Bahamas is wrapping up disaster preparedness month, it’s appropriate that we kick off the baseline assessment program,” said Bradley A. Golden, Humanitarian Assistance Program Specialist with USNORTHCOM. “The United States Northern Command’s Humanitarian Assistance Program’s number one priority is to collaborate with you, your ministries, and the public and private sector to mitigate risk and build resilience [at the national and community level],” said Golden who spoke as a strong supporter of the partnership initiative.

“Through the baseline assessment program, we leverage scientific data and conduct cutting-edge research to inform evidence-based decision making that leads to stronger disaster risk reduction outcomes,”  said PDC’s Director of Global Operations Dr. Erin Hughey when asked about the program. “We are on pace to have 20 percent the world’s most vulnerable countries assessed by the year 2020, with granular national and subnational data to help fill gaps in capacities,” said Dr. Hughey who sees the research as a catalyst for building regional and global partnerships and guiding risk reduction investments. All data collected and analyzed through the collaborative research is standardized and returned back to stakeholders in tabular and geospatial format for future use. In addition, the information is visually displayed and integrated into PDC’s geospatial platform, DisasterAWARE, and made freely available to disaster management stakeholders for operational response, mitigation, planning, and recovery.

During the event, Dr. Hughey spoke about the origin of the National Disaster Preparedness Baseline Assessment (NDPBA). She said it is a program started by PDC to help nations build resilience and to engage experts from across sectors to take part in lowering disaster risk. According to Dr. Hughey, PDC is located in one of the world’s most remote island chains and regularly faces extreme threats from tropical cyclones, earthquakes, volcanoes, tsunamis, flash floods, landslides, and wildfires. Out of necessity to protect its own community, PDC has developed some of the most advanced disaster management technology, science, and research methodologies which are applicable not only on the Hawaiian Islands and in the continental United States, but in multiple contexts everywhere around the world. 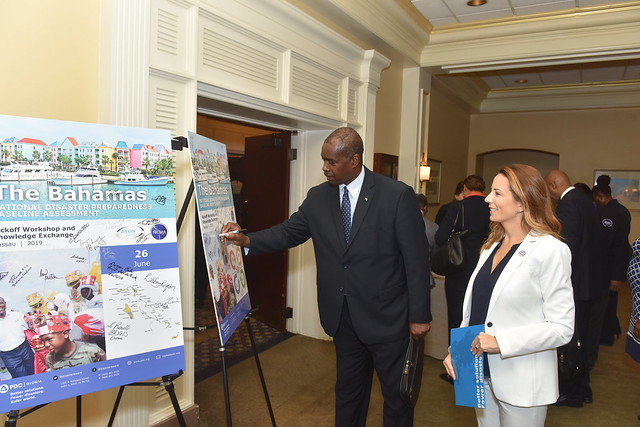