On the evening of March 13 (local time), Severe Tropical Cyclone Pam tore through the South Pacific Island nation of Vanuatu with destructive winds that flattened homes and knocked out communication. Heavy rainfall and storm surge caused widespread flooding and washed away roads and bridges, according to the United Nations Office for the Coordination of Humanitarian Affairs (UNOCHA) situational report.

As a category 5 cyclone, TC Pam severely affected the nation’s capital of Port Vila, located on Efate Island in Shefa Province, which is the only province at this stage to be officially declared in a State of Emergency. As of Monday, March 16 (local time), UNOCHA reports that the National Disaster Management Office has confirmed 24 fatalities so far as well as 3,300 people displaced and sheltering in 37 evacuation centers in Torba and Penama Provinces, and on Efate Island. These figures are expected to rise once communication is re-established with the nation’s outer islands.

Vanuatu’s President Baldwin Lonsdale appealed for international support in the wake of the nation’s “unprecedented damage,” reporting that “more than 90 percent of the buildings have been destroyed,” on the island of Efate. The Thomson Reuters Foundation has a summary report, but individual detailed news updates issued by the Government of Vanuatu are being posted on to ReliefWeb, as well. Of grave concern is the unknown impact to the outer islands, as disaster management officials and relief workers struggle to establish contact.

The UNOCHA Vanuatu Humanitarian Team (VHT) is supporting the Government-led response, according to OCHA’s “Vanuatu: Severe Tropical Cyclone Pam Situation Report No. 1,” and has agreed that evacuation centers, assessments, relief distribution, and shelter are the main priorities. Additionally, a UN Disaster Assessment and Coordination team arrived in Port Vila with personnel from OCHA’s Regional Office of the Pacific to support the coordination of incoming humanitarian assistance. Despite damage to the airport, commercial aircraft have resumed flights to Port Vila. UNOCHA also notes that water and electrical service are being rapidly restored in the capital.

The Asian Development Banks reports (ABD) that before reaching Vanuatu, Pam had already caused damage in some neighboring countries in the region including Tuvalu, Kiribati, and Solomon Islands. The Government of Tuvalu declared a State of Emergency on March 13, after tidal surges caused by Cyclone Pam to the southwest washed away houses and crops (RNZI). Tropical Cyclone Pam, as described by the New Zealand MetService (NZ Met), is now a low pressure system, still capable of generating heavy rainfall and gale force winds. The last interaction of Pam with inhabited land is expected to be in the Chatham Islands. “Damaging gales, rain and heavy swells [in the Chatham Islands] are expected to last through into Wednesday evening” local time.

Pacific Disaster Center continues to support disaster response operations for this event, and provide decision support information and products via DisasterAWARE EMOPS (Emergency Operations) application for disaster managers and humanitarian practitioners. If you are an emergency manager or humanitarian practitioner and would like access to EMOPS, please request access here.

For more information on the impacts of Tropical Cyclone Pam:• Look at the latest UNOCHA situation report, and• Visit Relief web for additional sources and links. 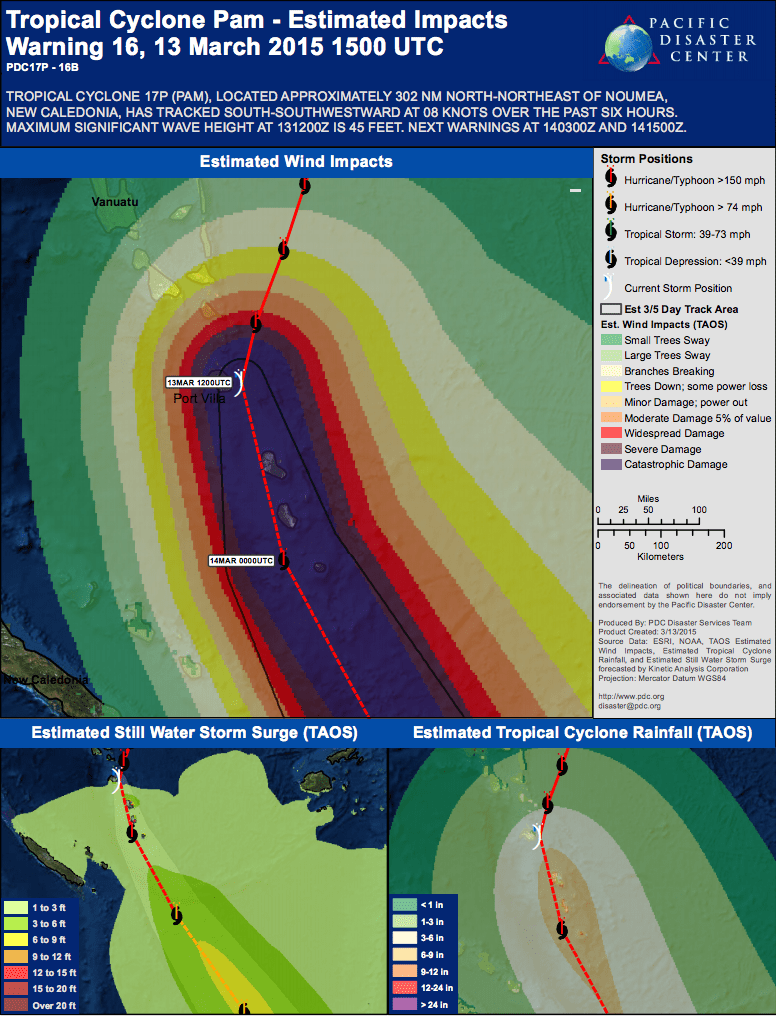