In the Southwest Pacific Ocean, Tropical Cyclone Pam has been gradually intensifying, and is expected to strengthen further, reaching peak intensity on Saturday, March 14 (local time), into a category five hurricane on the Saffir-Simpson wind scale, as it barrels past Vanuatu towards northern New Zealand, according to the Joint Typhoon Warning Center (JTWC). TC Pam is producing dangerous seas, with reported maximum wave heights reaching 44 feet.

As of Friday, March 13, (local time), the Vanuatu Meteorology and Geo-Hazards Department (VGMD) issued a tropical cyclone warning for Torba, Sanma, Penama, Malampa, Shefa, and Tafea Provinces. Forecasters expect destructive storm force winds to impact Penama and Malampa, and the capital (and area of most concentrated population), Port Vila, in Shefa Province, which will strengthen to very destructive hurricane force winds in 6 to 12 hours. The provinces of Torba, Sanma, and Tafea will experience damaging gale force winds, with winds over Tafea Province increasing further in the next 12 to 24 hours, according to the VGMD. Additionally, all provinces will experience rough to phenomenal seas with heavy swells, heavy to torrential rainfall and flooding, including flash flooding (anticipated in low-lying areas, and areas near river banks), landslides, and coastal flooding.

The Vanuatu National Disaster Management Office (NDMO) has the provinces of Torba, Sanma, Penama and Malampa on Red Alert, while a Yellow Alert is in effect for the provinces of Shefa and Tafea. The Government of Vanuatu continues to advise residents in these provinces to listen to all radio broadcasts for the latest information on TC Pam. 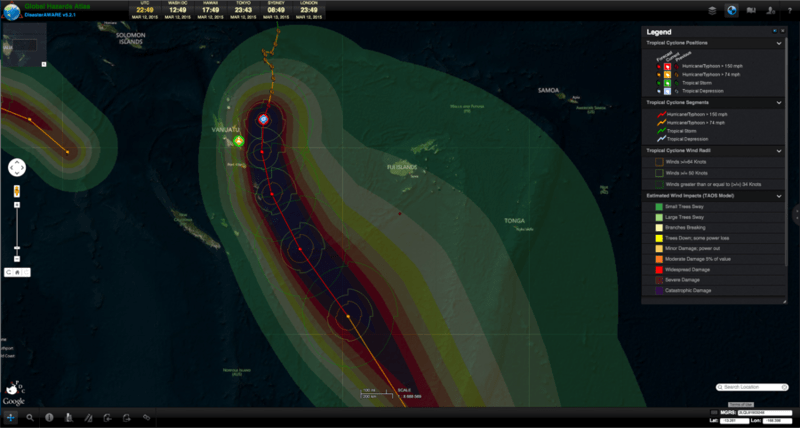