Off the west coast of Thailand, in the Bay of Bengal, Tropical Cyclone Phailin is threatening millions of residents in South Asia. According to the Joint Typhoon Warning Center (JTWC), Phailin has been rapidly intensifying and is expected to reach super typhoon status Friday, October 11. By early Saturday, it is forecast to make landfall along the highly populated northeast coast of India, which is vulnerable to storm surge and high surf.

To understand the level of concern surrounding Phailin, it is important to note that according to the Weather Underground, 26 of the 35 deadliest tropical cyclones in history have occurred in the Bay of Bengal. The deadliest cyclone to strike the Bengal coast, the Bhola cyclone, claimed between 300,000-500,000 lives in 1970, in what is now Bangladesh.

In preparation for Cyclone Phailin, the Indian Meteorological Department (IMD) is warning residents that Phailin will likely cause extensive damage to homes and agricultural crops, disrupt power and communication lines, flood rail and road routes, and cause flying debris. The IMD also advised fishermen to return to the coast and avoid venturing out to sea. The Thomas Reuters Foundations reported IMD’s Director General advising that authorities have started to stock shelters with rations and put disaster response teams on alert.

Meanwhile, Typhoon Nari has also been increasing in strength as it moves towards the east coast of Luzon Island in the Philippines. Nari is expected to bring high surf, storm surge, strong wind and heavy rain as it moves across the island to the north of the capital city of Manila. It will then enter the warm South China Sea and is forecast to strengthen before heading into the area south of Hainan Island, China and towards the Vietnamese central coast, striking just north of the city of Hue on the 15th of October.

For more information on these storms:
• Visit the Weather Underground site,
• View information from the Indian Meteorological Deparrment, and
• Read articles from the Thomson Reuters Foundation about Cyclone Phailin and TS Nari. 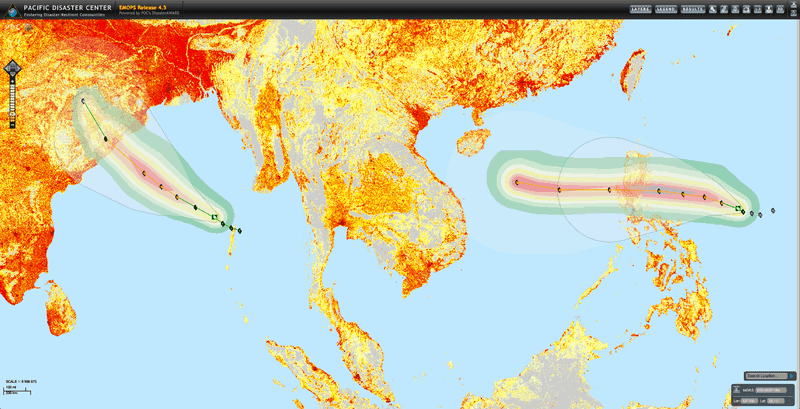