The U.S. Geological Survey (USGS) reported a massive 8.2 magnitude earthquake that struck off the coast of northern Chile on Tuesday, April 1, at 8:46 p.m. (local time), about 60 miles NW of the city of Iquique, an area that has recently experienced a great deal of seismic activity. At a shallow depth of 12.5 miles, the strong quake triggered a small tsunami, landslides, and widespread structural damage and power outages. As reported by the Thomson Reuters Foundation, Chilean authorities have confirmed six deaths, a remarkably low toll for such a strong earthquake. More than 60 significant aftershocks were recorded, including a 6.2 magnitude jolt, according to the USGS.

Following the quake, a mandatory evacuation kept more than 900,000 people away from their homes along Chile’s low-lying coastline. The Pacific Tsunami Warning Center (PTWC) reported that the quake generated a sea wave of over 7 feet (2 meters). The tsunami caused flooding in city streets, and washed away some fishing boats, but no major tsunami damage was apparent. Chilean President Michelle Bachelet visited affected areas on Wednesday, April 2, declaring a state of emergency in three regions around the earthquake disaster zone.

The PTWC posted a tsunami advisory for the State of Hawaii, and continuously evaluated the situation, and canceled the notification at 7:25 a.m. (local time) on Wednesday after small sea level changes declined. During the event, PDC also generated and posted a variety of products for public consumption, all based on the latest information from PTWC.  Hawaii Island saw the most significant sea level change of 1.9 feet in 16 minutes, reported at 3.42 a.m. (local time). Hawaii residents were warned that even though the tsunami advisory is canceled, sea level changes may continue for several hours, and there may be strong and unusual currents. PTWC also reported that sea level changes were recorded in California.

Chile is one of the most earthquake-prone areas in the world. In 2010, an 8.8 magnitude earthquake and resulting tsunami struck central Chile, killing over 500 people. Back in 1960, the Great Chilean Earthquake—recorded at a magnitude of 9.5—struck southern Chile. This is the largest seismic event in modern history.

For more information on the Chile earthquake:
• Visit the PTWC and USGS sites for up-to-date information,
• View the Thomson Reuters Foundation site for more articles,
• Read a Washington Post article, and
• See a Star Advertiser story about impacts to Hawaii. 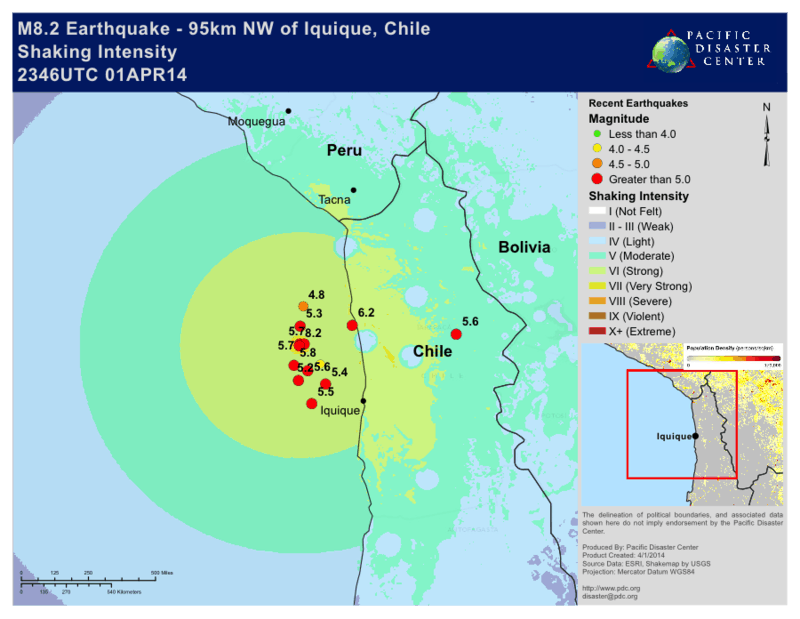