Since 2012, Nepal’s Ministry of Home Affairs (MoHA), National Emergency Operation Center (NEOC), and Nepalese Army (NA) have been working to strengthen internal geospatial capacity through a partnership with the U.S. Army Corps of Engineers (USACE) and Pacific Disaster Center (PDC). These efforts have been formalized as a joint project called the Nepal Geographic Information System (GIS) Integration Project, undertaken in support of the National Disaster Response Framework (NDRF).

To address the nation’s vulnerability to earthquakes and test the Tribhuvan International Airport Disaster Response Plan (TIA DRP), including determining how well the Plan matched with the NDRF, various Nepalese stakeholders recently came together in an exercise, which was implemented as part of the ongoing Nepal GIS Integration Project on September 15-18 in Kathmandu. Approximately 125 participants worked collaboratively to test the TIA DRP. The exercise used a scenario centered on a large earthquake impacting Tribhuvan, Nepal’s only international airport.  Justin Pummell, a Geographer with USACE, and primary lead for the Nepal GIS Integration Project, explained that if a large earthquake were to destroy the airport’s runway, “Kathmandu Valley would be severely limited on the amount of international aid it could receive.”

While the TIA DRP was developed in 2012, the Plan had not been tested prior to this exercise. The experience gained by conducting the exercise enhanced disaster response capacity, promoted awareness of the Disaster Response Plan among stakeholders, identified current gaps and weaknesses in the Plan, and helped to identify necessary points at which communication and coordination must be improved in support international assistance in times of crisis.

The Nepalese Army is designated as the lead agency for disaster response, and as such, played a fundamental role in the TIA DRP exercise. The overall exercise included both a hybrid table-top exercise/command post exercise and a live-action field training exercise. Participants used and tested the utility of the DisasterAWARE platform as an emergency management tool, while PDC provided support to Nepalese Army GIS Specialists, who served as administrators for DisasterAWARE to respond to exercise injects, map critical locations, post disaster-related documents, and share information between cells to maintain situational awareness and to support decision making. PDC staff provided both pre-exercise and post-exercise briefings to demonstrate how DisasterAWARE would be/was implemented during the simulation.

An After-Action Review revealed many valuable inputs for the TIA DRP and the NDRP. Exercise participants represented the Government of Nepal, the Nepalese Army, international organizations, foreign embassies, and U.S. Department of Defense components.

For more information on this event:
• Read an event article by the US Army. 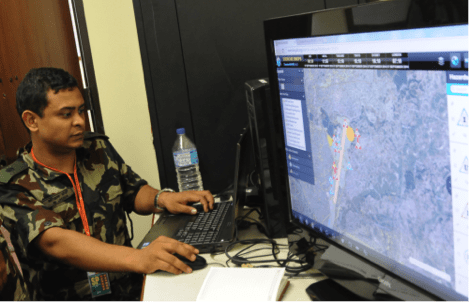