On Sunday, September 14 (local time), the Mexican resort city of Cabo San Lucas bore the powerful strength of Hurricane Odile, as it made landfall. Due to the heavy rainfall and fierce winds that knocked down trees, and cut off power, locals and tourists were forced to evacuate and seek emergency shelter. The Associated Press reported that Luis Felipe Puente, the national coordinator for Mexico’s civil protection agency, said that Mexican authorities evacuated residents in coastal areas and 164 shelters had been opened for as many as 30,000 people in Baja California Sur.

The current (Monday afternoon) National Hurricane Center (NHC) advisory indicates that  Odile is currently weakening, but continues to pose serious threats due to heavy rainfall and flooding. The center of Odile is expected continue to move over the Baja California Peninsula through Tuesday, September 16, and move over the northern Gulf of California, also called the Sea of Cortez, on Wednesday, September 17.

Along its path, Odile will continue to bring powerful winds, create dangerous storm surge that is expected to cause significant coastal flooding, dump intense rainfall with the potential to result in life-threatening flash floods and mudslides, and generate treacherous surf and rip-current conditions.

For more information on Hurricane Odile:
• Visit the National Hurricane Center for the latest advisory and forecasts,
• Take a look at information from NASA, and
• View information and updates on Weather Underground (WU). 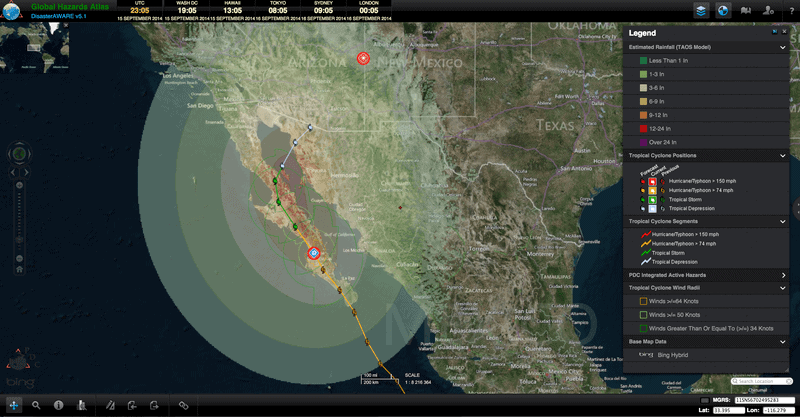