Emergency managers in Vietnam are continuing efforts to reduce the risks of natural hazards through capacity enhancement for national hazard monitoring and early warning.  As part of the effort, frequent trainings, exercises, and workshops have been taking place to define the operational use of an advanced information-sharing and decision support system, called VinAWARE. Formally initiating the development of Standard Operating Procedures (SOPs) for the system, 20 participants from key stakeholder agencies gathered for a four-day working session conducted at Vietnam’s Disaster Management Center (DMC) in Hanoi, January 13–16.

Pacific Disaster Center (PDC) is responsible for the development and deployment of the VinAWARE system, which is based on the DisasterAWARE platform, and as part of that project, helped to facilitate the recent SOP-development workshop. PDC’s Southeast Asia Program Advisor Victoria Leat and Disaster Management Specialist and Response Lead Michael Chatman guided participants as they defined procedures to undertake during various phases of the disaster management cycle for a number of types of disasters experienced Vietnam. PDC’s existing SOPs were used as a starting point. They were adjusted for Vietnam’s disaster management policies and regulations, resulting in draft versions of SOPs for manually-posting hazards to VinAWARE and for using VinAWARE during for both disaster response and exercises. During the week-long event, a two-day VinAWARE user training session was also conducted for selected participants, helping to provide them with foundational skills for the use of the VinAWARE system.

This working session was part of a second phase of the Flood Modeling and Early Warning Capacity Development Project (FEW2), funded by the U.S. Agency for International Development (USAID) Office of Foreign Disaster Assistance (OFDA). Under FEW2, Vietnam’s Ministry of Agriculture and Rural Development (MARD) Disaster Management Center (DMC) has worked in partnership with PDC to implement the two-year project.

Learn more about the FEW2 Project with these resources:
• Read more about VinAWARE training helping to build capacity,• Read about Vietnam’s recent flood modeling workshop,• Details on the first VinAWARE training sessions,• Information from the FEW2 stakeholder meeting,• The launch of the USAID-supported FEW2 Project,• Special training in the use of PDC’s DisasterAWARE,• News of PDC commitment to DM in Vietnam,• A description of the first use of the VinAWARE,• The first Flood Early Warning Project launched in 2009, and • To see what Dr. Phuc and the DMC are doing, go to www.dmc.gov.vn. 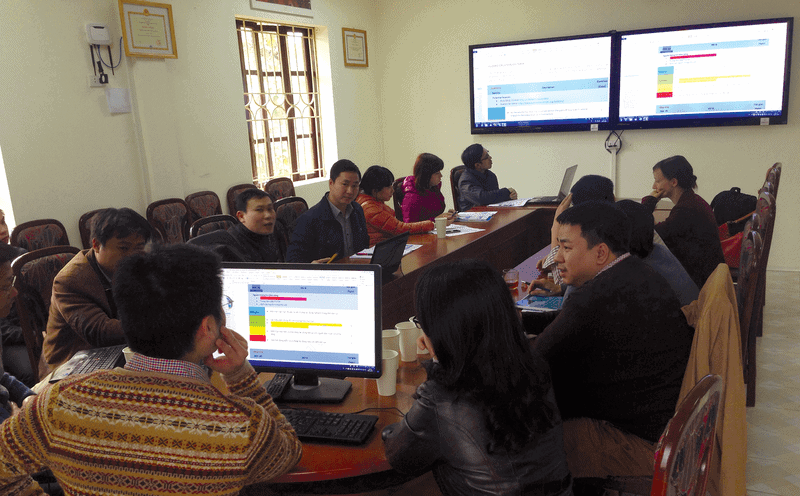