After meandering in the Coral Sea for over a week, Tropical Cyclone Nathan targeted the northeast coast of Queensland, Australia, making landfall around 0400 AM on Friday, March 20 (local time), between Cape Melville and Cape Flattery as a category 4 tropical cyclone, according to the Australian Bureau of Meteorology (BOM) rating scale. The latest BOM update (#68 at 12:04 a.m. EST Australia) reports TC Nathan weakening into a category 3 cyclone as it moves inland, and indicates that the storm is expected to weaken further as it continues its westward path over land.

A Warning Zone has been issued for the coastal areas from Cape Sidmouth to Cape Flattery, and adjacent inland areas, while a Watch Zone has been issued for Numbulwar to Maningrida, including Nhulunbuy and Groote Eylandt (Northern Territory). Australia’s BOM reports destructive winds and gales are currently affecting coastal and adjacent inland areas between Coen and Cape Flattery that will later extend further west and inland this afternoon. Between Coen and Cooktown, heavy rainfall that could lead to flash flooding is occurring, which will extend across the Cape York Peninsula today, and large waves remain likely to occur along the beachfront.

Australia’s BOM is issuing new advice every hour, providing preparation and safety recommendations and other useful information on their website. They recommend that people in coastal areas between Coen and Cape Flattery remain calm and stay in secure shelter as destructive winds continue. They strongly urge people to heed the advice and instructions of police, emergency service personnel, and local authorities. For more cyclone preparedness and safety advice, visit Queensland’s Disaster Management Services website.

According to the Joint Typhoon Warning Center, after crossing through the Cape York Peninsula, TC Nathan is forecast to regain Tropical Cyclone Strength in the Gulf of Carpentaria before making a second landfall in Arnhem Land, Northern Territory.

Pacific Disaster Center continues to produce situational awareness products and provide decision support tools and information via DisasterAWARE. Keep track of key developments for Tropical Cyclone Nathan through PDC’s Disaster Alert™ mobile application (for iPhone, iPad, and Android™) and the Global Hazards Atlas, available to all. Emergency managers and humanitarian assistance practitioners may request access to the DisasterAWARE EMOPS (Emergency Operations) application, which provides a secure environment for accessing, updating, and sharing information for this event, and others occurring around the world.

For more information on Tropical Cyclone Nathan:• Visit the Australian Government’s Bureau of Meteorology website,• View information from the Joint Typhoon Warning Center, and
• Go to the NASA site for additional photos and graphics of the cyclone. 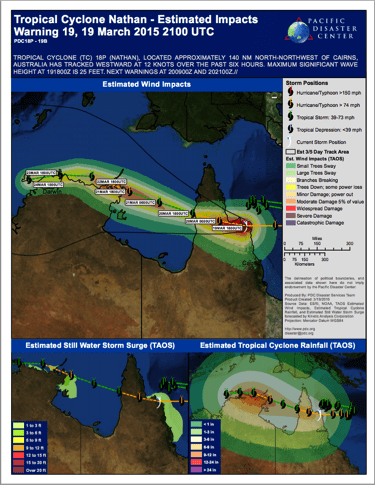