In May, as Tropical Cyclone Mahasen headed for Dhaka, Bangladesh, the U.S. Pacific Command’s Multinational Planning Augmentation Team (USPACOM MPAT) was conducting the Tempest Express-22 (TE-22) Staff Planning Workshop hosted by the government of Bangladesh and involving civil and military participants from many countries. Pacific Disaster Center (PDC) Disaster Management Specialist & Exercise Lead Todd Bosse was onsite to coordinate the use of DisasterAWARE for TE-22, and was able to highlight the real-world value of PDC’s tools and services to decision makers.

The TE-22 workshop focused on developing a concept of operations for a multi-national response to a catastrophic earthquake in the capital city, Dhaka. TE-22 also aimed to improve disaster response coordination among civil ministries of the Government of Bangladesh, the Bangladesh Armed Forces Division, and international humanitarian actors. PDC demonstrated its ability to support disaster operations and to advance the underlying goals of workshop.

As part of the workshop, data was initially prepared for an exercise involving an earthquake scenario, but as Cyclone Mahasen approached, the DisasterAWARE early warning and decision support platform was quickly redirected for real-world use.  It was able to display hazard and local-level GIS base data for Dhaka, such as healthcare and transportation infrastructure. While providing near real-time storm data, the platform visualized potential damage and tracked responding units on the map. By providing a common operating picture and acting as a communication hub, DisasterAWARE promoted efficient interagency information sharing.

The next MPAT Tempest Express Workshop will be in Wellington, New Zealand in August 2013. 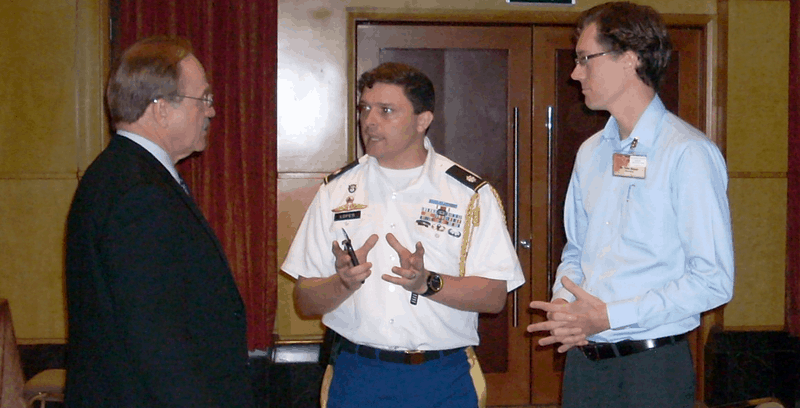