Heavy rains caused flooding in areas across Myanmar during the months of June and July. These monsoonal floods were made more severe by heavy rainfall and strong winds associated with Cyclone Komen, which made landfall in Bangladesh on July 30.

Myanmar is a member of the Association of Southeast Asian Nations (ASEAN). The AHA Centre in coordination with the 10 ASEAN Member States offers assistance when it appears that the circumstances or disaster impacts may be beyond the capacity of local officials. In AHA Centre’s Situation Update No. 2, dated 05 August, it is reported that Myanmar’s Relief and Resettlement Department (RRD) appealed for help and “welcomed the offer of support” from the Centre. As of that report, flooding was said to have resulted in “46 deaths and approximately 217,000 people affected.” The Update also indicates that more than one million acres of farmland have been inundated, possibly affecting food security in the affected areas.

This flooding is also severely impacting transportation—with at least 31 bridges down in Rakhine State alone—and public infrastructure, as well as destroying destroying homes.

According to the Myanmar Snapshot of Humanitarian Issues released by UN OCHA on July 31, 2015, “The Government has led emergency response operation, including the distribution of relief items and provision of medical care to the flood affected townships. The Myanmar Red Cross Society and local NGOs, as well as international organizations also provided assistance in some areas.” At that time, however, OCHA noted that humanitarian access for international organizations remained restricted. Having accepted the offer of assistance from the AHA Centre, Myanmar officials have since accepted the formation of a UN OCHA Humanitarian Country Team, and invited the escalation of response by the International Federation of Red Cross and Red Crescent Societies (IFRC) and Doctors Without Borders.

Pacific Disaster Center (PDC) is issuing situational awareness products to support the efforts of emergency managers addressing the event. If you are an emergency manager and would like to apply for an EMOPS account please visit emops.pdc.org.

Learn more:
• Read an article about UN food agency delivering aid,
• Read about the impacts of Cyclone Komen on IDP’s,
• Learn more about PDC’s work with ASEAN, or
• Visit the AHA Centre website. 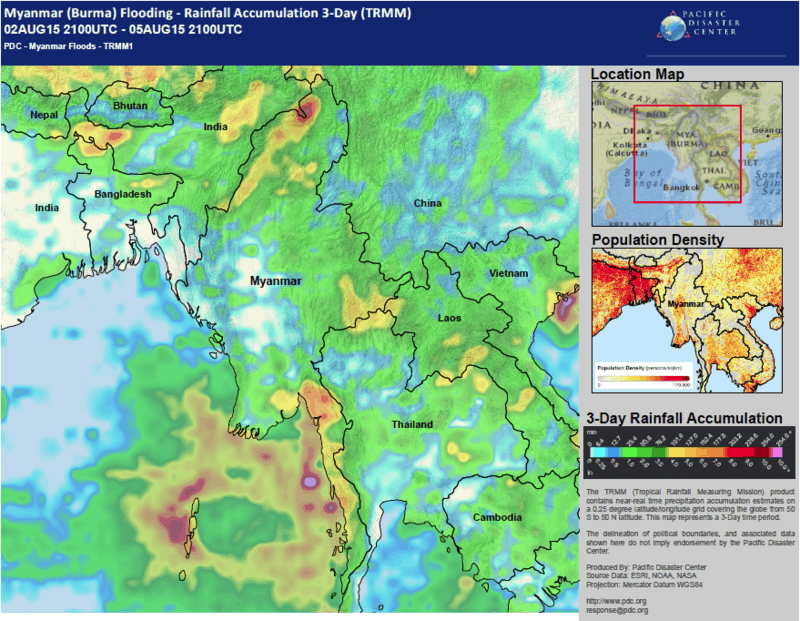