In the wake of what has been reported as the strongest earthquake to strike Ecuador in decades, response operations are underway as search and rescue teams and response agencies continue efforts in disaster-affected communities. As of April 18, the shallow 7.8M earthquake that struck off the town of Muisne in northwestern Ecuador on Saturday destroyed over 800 buildings and affected another 608, mostly in the hardest hit provinces of Manabí and Esmeraldas.

Overall, the earthquake has caused severe damage to the provinces of Manabí, Esmeraldas, Santo Domingo, Los Ríos, Santa Elena, and Guayas, and prompted government officials to declare a national state of emergency.

In some of the most affected areas, water, electricity, and telephone services have yet to be restored. Télécoms Sans Frontières has been deployed to assess the telecommunications situation, where reports indicate that (as of April 17) less than half of the country’s communications lines are operational. Although electricity is gradually being re-established, only 41% of the population in Manabí has access to power.

At the time of the quake, the U.S. Geological Survey issued an Orange Pager alert for shaking-related fatalities and economic losses, as it was estimated that significant casualties and damage were likely and the disaster potentially widespread.

As of April 18 (1830 local time), the Secretaría Nacional de Gestión de Riesgos (Ecuadorian Secretariat for Risk Management) reports that the 7.8M earthquake resulted in 413 fatalities and more than 2,600 injuries. It is expected that the number of fatalities and injuries will rise due to ongoing search and rescue efforts.

Ecuador’s health system is also on maximum alert, with significant concerns related to water, sanitation, and hygiene (WASH) issues and preventing the spread of Zika in affected areas.

PDC is actively supporting the response efforts in Ecuador, and will continue to provide situational awareness products and decision support as events unfold. If you are an emergency manager or humanitarian assistance practitioner, and would like access to PDC’s DisasterAWARE (EMOPS) platform, click here for more information.

For more information about the 7.8M Ecuador Earthquake, click here. 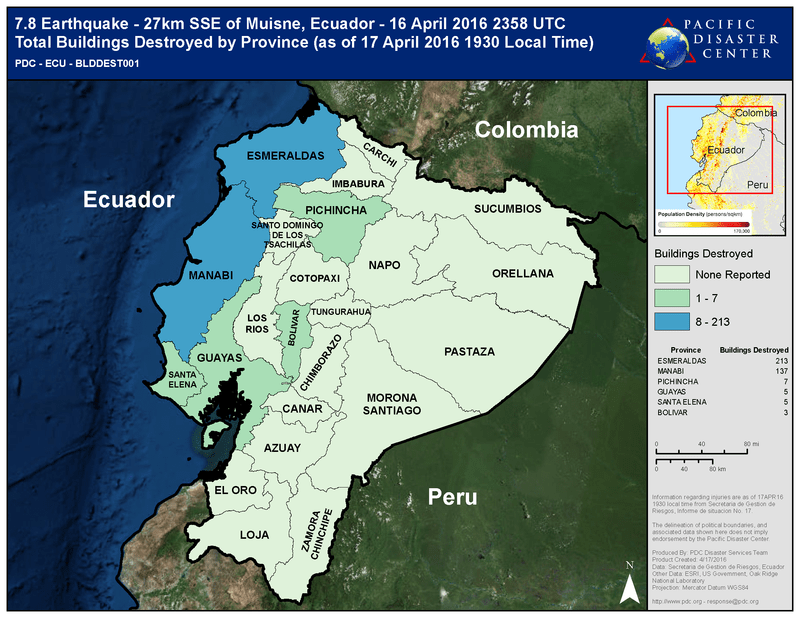