With nearly 1.5 million global downloads, Disaster Alert, a free mobile app for multi-hazard monitoring, has been instrumental in delivering near real-time information about major events worldwide, helping users to better prepare for potential disasters. Since its initial release in 2010, the application has been featured in USA-Today, CNN, and on Discovery Channel as one of the most effective tools available to the public.  Based on user feedbacks, Pacific Disaster Center (PDC) is now releasing a new version, Disaster Alert 3.0, which offers a set of advanced features and a fresh design for devices running iOS 6+ or higher. The new design for Android devices will follow in early 2014.

The Disaster Alert 3.0 application continues to feature PDC’s Integrated Active Hazards, a set of current and real-time incidents, compiled from authoritative sources around the globe, and designated “potentially hazardous to people property or assets” by PDC’s DisasterAWARE decision support system.

Besides a fresh new design, the upgrades to Disaster Alert include important features such as new global information overlays of population density, rainfall, clouds, temperature, and more, as well as improved access to supporting hazard information, and an easy (event) share option via Facebook, Twitter, or Email.

To-date, by far the most frequently requested feature has been the ability for users to customize push notifications for a limited geography or hazard severity. While all users may continue to enjoy features and global alerts without charge, a new subscription service has been added to Disaster Alert, offering users the ability to customize notifications just as requested. Users may subscribe to the service for 3, 6, or 12 months for a nominal fee. Proceeds from subscription sales will be used to further enhance the platform. The same subscription will work for all of a user’s iOS devices, and it will provide access to enhanced account features on the PDC Global Hazards Atlas.

The new version (3.0) is compatible with iPhone, iPad, iTouch (iOS 6.1+). Users with Android and older iOS (below iOS 6) can continue to run the old version of the application.

To find out more about the Disaster Alert application:
• Find download links on the PDC website,
• See PDC’s original Story on the release of Disaster Alert, and
• Read about positive user comments after its initial release. 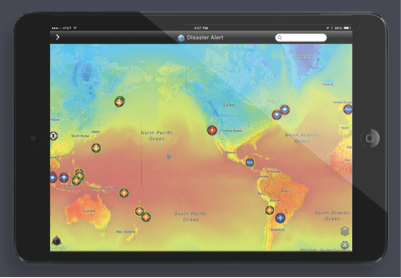