As reported on ReliefWeb, after Super Typhoon Haiyan hit the Philippines it tracked across the warm South China Sea to Vietnam, claiming casualties and causing hundreds of thousands of people to evacuate. This is not an uncommon scenario in the region. Southeast Asia is vulnerable to numerous hazards, including tropical cyclones, which endanger millions of residents and cause wide-spread damage due to high winds, coastal surge, and extreme flooding. Occasionally, large scale events require relief, response, and recovery efforts that extend across national borders. To test and improve their disaster management processes and regional agreements, and to ensure that they are ready to support disaster response efforts in neighboring countries, the ten Members States of the Association of Southeast Asian Nations (ASEAN) conduct an annual ASEAN Regional Disaster Emergency Response Simulation Exercise (ARDEX).

Incidentally taking place just prior to when Haiyan hit the region, the Government of Vietnam hosted, and along with the ASEAN Coordinating Centre for Humanitarian Assistance on disaster management (AHA Centre), co-organized ARDEX-13, which was conducted on October 21 to 24 in Hanoi, Vietnam. The four-day event was an opportunity to practice, test, and evaluate the readiness of disaster responders and emergency response mechanisms under the ASEAN Standby Arrangements and Standard Operating Procedures (SASOP). ARDEX is also a means of identifying lessons learned to further improve both SASOP and the participants’ actual joint response to disasters.

The scenario for the exercise was not far from the real world tragedies that Haiyan caused. According to the scenario, fictional Super Typhoon Neptune makes landfall over Vietnam, causing wind damage and collapsed structures, massive flooding, and chemical spills. Responders from the region are then mobilized to address all of these events. Pacific Disaster Center (PDC) was an invited observer of this exercise.

PDC has been collaborating with the ASEAN Committee on Disaster Management (ACDM) for many years in disaster risks reduction (DRR) efforts in the region. These collaborations culminated in 2012, with the deployment of the region’s first multi-hazard “Disaster Monitoring and Response System (DMRS)” at the AHA Centre in Jakarta. DMRS is a customized system based on PDC’s DisasterAWARE platform. The DMRS offers a consolidated environment for multi-hazard monitoring, early warning, decision-making, and information sharing. DMRS was one of the resources relied on for the ARDEX-13 exercise.

PDC Executive Director, Ray Shirkhodai, attended the exercise, and observed the real-world response to the fictitious Super Typhoon Neptune, which made simulated landfall in the area of the Northern Delta Provinces near Hanoi. ARDEX-13 was the first opportunity to fully test the operational capability of the AHA Centre since its establishment in November 2011.

The multi-level event involved over 800 individuals from various Vietnam national agencies in addition to 90 responders representing ASEAN Member States, and more than 1,000 volunteers. Emergency communications were exercised in Hanoi, then neighboring countries exercised their customs, immigrations, and quarantine mechanisms, and everyone participated in workshops, including a refresher course for the ASEAN Emergency Rapid Assessment Team. To test the implementation of joint disaster response procedures, a field simulation exercise was held in Ba Vi. Finally, all participants helped evaluate the implementation of procedures and mechanisms during the exercise. 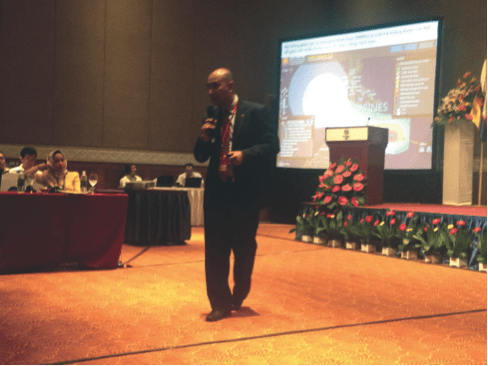