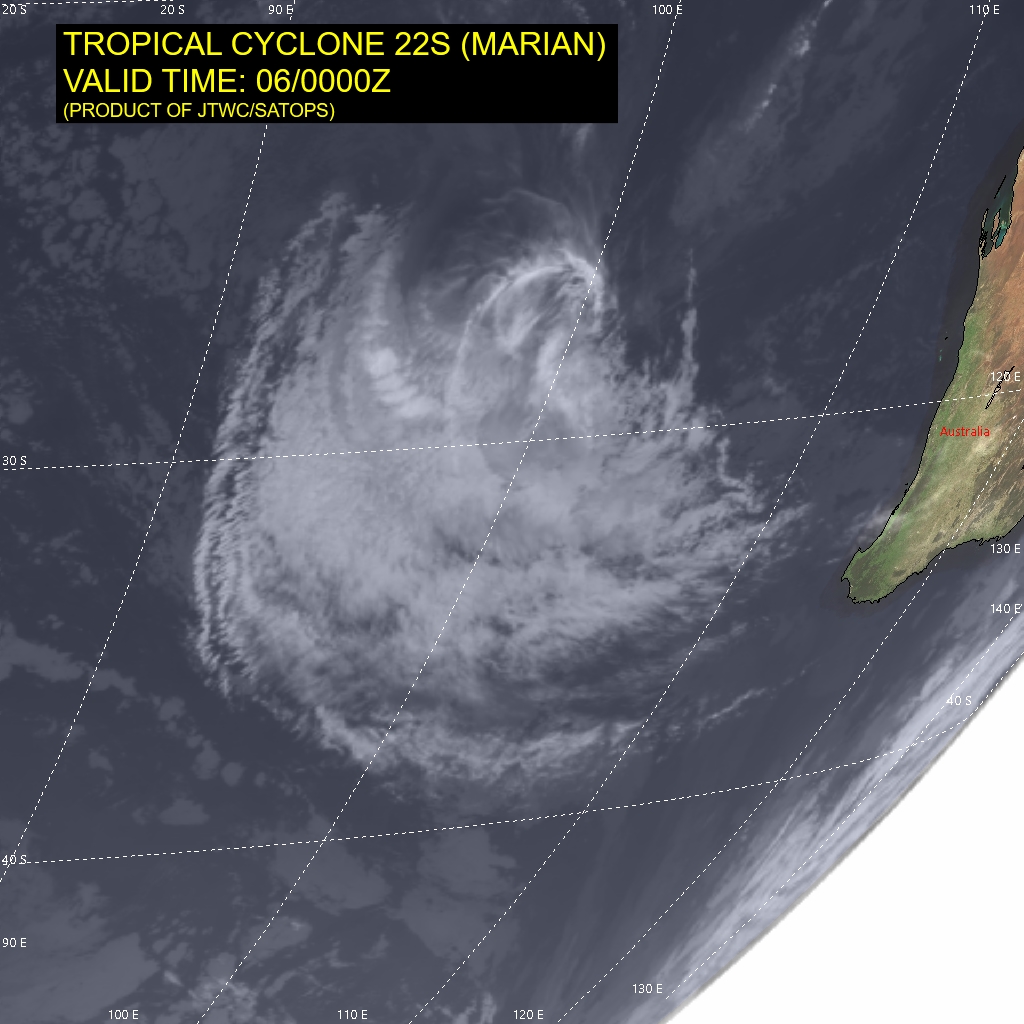 Sustained 35 knot winds…with gusts to 45 knots (as of Warning Number 17) Here’s what the computer models are showing According to the JTWC, satellite imagery shows that the core of the system has been completely sheared apart, with modest convection sheared significantly southeastward of the low level circulation center. Analysis reveals a very unfavorable environment characterized by high 30+ knot wind shear and cool sea surface temperatures overcoming the very robust poleward outflow.TC 22S will continue to track southward, turning slightly southwestward by 36 hours, as it dissipates below warning criteria, and comes under the steering influence of the low level synoptic flow.

Sustained 120 knot winds…with gusts to 145 knots (as of Warning Number 4) Here’s what the computer models are showing According to the JTWC, satellite imagery shows that TC 24S has undergone a cycle of extremely rapid intensification over the previous six hours. A small 10 NM wide eye feature developed, with deep convection completely surrounding the very small and intense core. The environment is obviously very favorable with very low 5-7 knot wind shear, strong poleward and moderate equatorward outflow, and warm sea surface temperatures. TC Habana is expected to continue tracking east-northeast through 24 hours, then turn east. Through 72 hours there will be a turn to the south. Thereafter a strong ridge will build into the south and turn TC 24P onto a westward track through the remainder of the forecast. The forecast calls for the system to reach a peak of 100 knots by 12 hours before starting a slow weakening trend through the remainder of the forecast, primarily in response to a decrease in upper-level outflow and some mid-level dry air entrainment.

Sustained 130 knot winds…with gusts to 160 knots (as of Warning Number 20) – Equivalent to a Super Typhoon Here’s what the computer models are showing According to the JTWC, satellite imagery shows that the eye that was so clearly evident six hours ago has now completely filled. The convective structure has also deteriorated over the past six hours, with little in the way of deep convection in the southern and southwestern quadrants The system is expected to intensify to a peak of 110 knots by 24 hours as it enters a short period of very strong poleward outflow and relatively low wind shear. This intensification will be short lived and by 36 hours, the steadily increasing wind shear and cooler sea surface temperatures will conspire to weaken the system as it rapidly translates to the southeast. As the system passes New Caledonia and begins to transition to subtropical, the guidance becomes increasingly uncertain with some models unrealistically moving the system well to the south of New Zealand, while the remainder of the consensus members show a slow turn towards the east after 72 hours, as a strong transient high pressure area develops east of New Zealand.

There’s a tropical disturbance being referred to as Invest 91S, which is located approximately 104 NM southwest of Toamasina, Madagascar Here’s was the computer models are showing According to the JTWC, satellite imagery shows disorganized and flaring convection over land, without a clear low level circulation. However, 91S is poised to exit into the South Indian Ocean into a favorable environment with excellent dual channel upper level outflow, low <15 knot wind shear…and warm sea surface temperatures. Global models are in general agreement that 91S will undergo minimal consolidation and intensification over the next 3-days. Maximum sustained surface temperatures are estimated at 20-25 knots. The potential for the development of a significant tropical cyclone within the next 24 hours remains low.   Here’s a link to the Joint Typhoon Warning Center (JTWC)   For real-time information on current disasters download PDC’s free Disaster Alert mobile app available for your iOS or Android devices today! Also be sure to monitor PDC on Twitter, Facebook, and by accessing the web-accessible Disaster Alert from your computer, phone, or tablet.