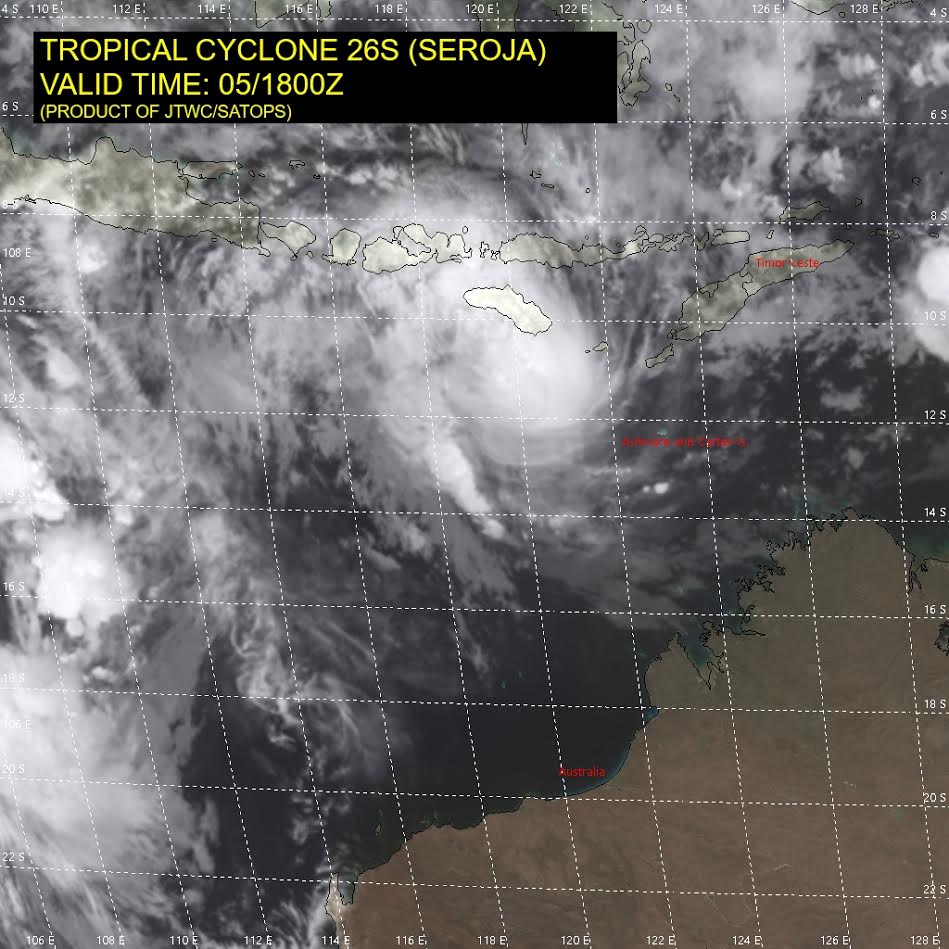 Sustained 55 knot winds…with gusts to 70 knots (as of Warning Number 7) Here’s what the computer models are showing According to the JTWC, satellite imagery shows the system continuing to consolidate around a region of deep convection with fragmented rain bands. TC 26S is in a marginally favorable environment with fair radial outflow, slightly offset with moderate 15-20 knot wind shear and warm sea surface temperature. The cyclone will continue to move southwest as the main subtropical ridge builds in from the southeast, and the near equatorial ridge to the northeast weakens over the Flores sea and becomes less of an influence to TC Seroja. Environmental conditions will become more favorable along the forecast track, allowing for steady intensification to a peak of 100 knots by 96 hours. Afterward, increasing wind shear and cooling sea surface temperatures will weaken the system down to 95 knots as the cyclone tracks more southward in response to the steering ridge weakening and receding eastward. Numerical models are in fairly tight agreement up to 72 hours. Afterward, along and cross track errors become significant across all models, likely due to possible binary interaction with TC 27S, currently in the Indian ocean south of Christmas Island. This interaction seems to be less prominent in the later hours of the model solutions at this time…due to the high track error of TC 26S.

Sustained 40 knot winds…with gusts to 50 knots (as of Warning Number 5) Here’s what the computer models are showing According to the JTWC, satellite imagery shows deep convection sheared to the south of an obscured low level circulation center. Analysis indicates a marginally favorable environment with moderate 15-20 knot wind shear, offset with strong poleward outflow aloft, and warm sea surface temperatures. TC 27S is expected to remain quasi-stationary with some slight eastward motion as the near equatorial ridge to the northeast weakens and recedes westward through 48 hours. After 48 hours, the system is expected to turn more poleward as the subtropical ridge to the southeast will assume steering. The slow motion of the system and marginally favorable environment will fuel a slow intensification to a peak of 60 knots by 72 hours. Afterward, the cyclone will weaken to 45 knots by 120 hours, as possible binary interaction with TC 26S begins to absorb TC 27S.   Here’s a link to the Joint Typhoon Warning Center (JTWC)   For real-time information on current disasters download PDC’s free Disaster Alert mobile app available for your iOS or Android devices today! Also be sure to monitor PDC on Twitter, Facebook, and by accessing the web-accessible Disaster Alert from your computer, phone, or tablet.