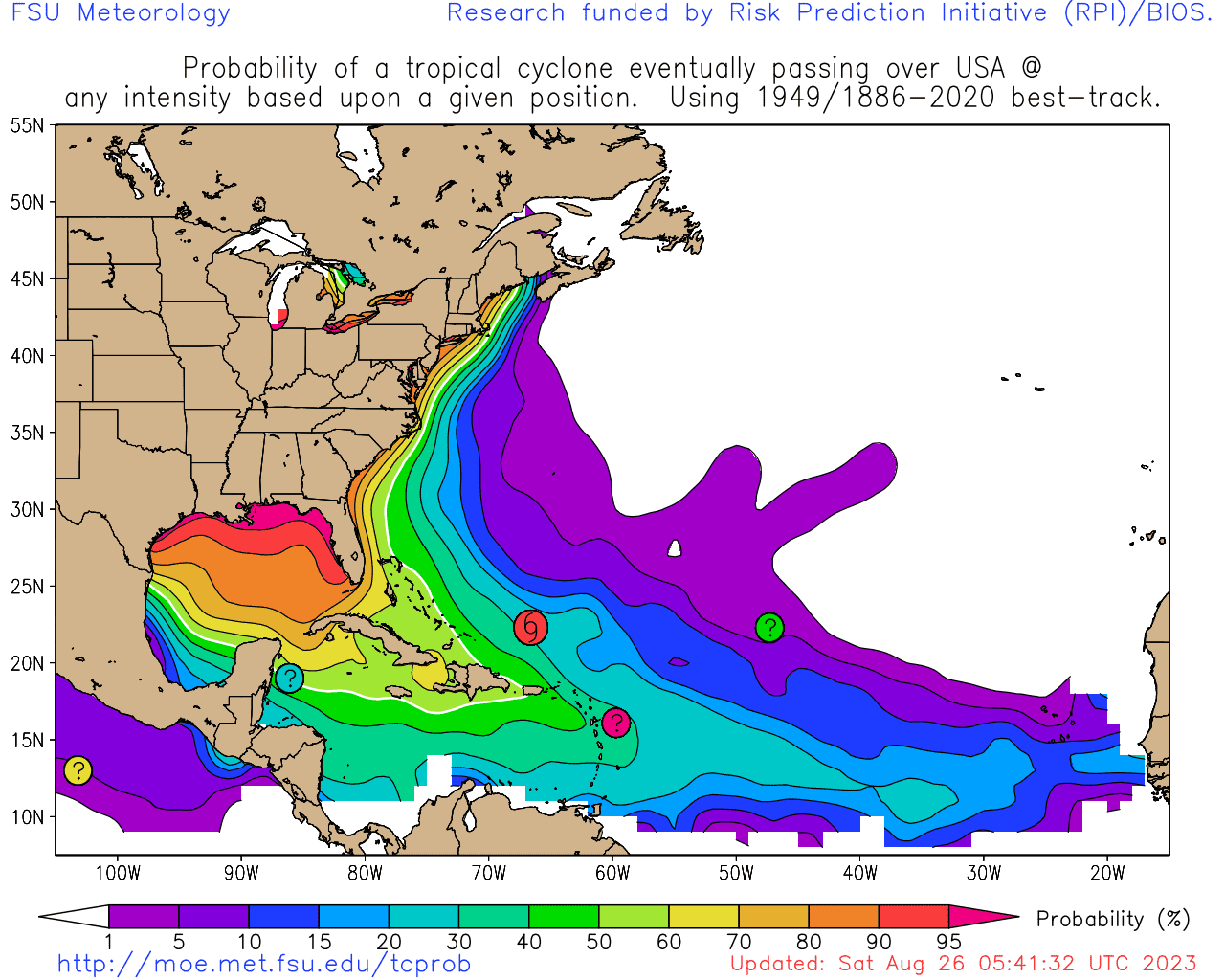 Tropical Cyclone 13L (Laura) According to the NHC Advisory 17A…Laura is moving toward the west-northwest near 21 mph (33 km/h), and this general motion with some decrease in forward speed is expected over the next couple of days. A turn toward the northwest is forecast by Wednesday. On the forecast track, the center of Laura will move over the Caribbean Sea just offshore the southern coast of Cuba today, and move into the southeastern Gulf of Mexico tonight and Tuesday. Laura is then forecast to move over the central and northwestern Gulf of Mexico Tuesday night and Wednesday. Maximum sustained winds remain near 65 mph (100 km/h) with higher gusts. Gradual strengthening is expected, and Laura is forecast to become a hurricane by early Tuesday. Tropical-storm-force winds extend outward up to 150 miles (240 km) from the center. HAZARDS AFFECTING LAND RAINFALL: Laura is expected to produce the following rainfall accumulations through Tuesday: Dominican Republic, Haiti and Cuba: 4 to 8 inches, with maximum amounts of 12 inches. This heavy rainfall could lead to life-threatening flash and urban flooding, and the potential for mudslides across the Greater Antilles. Rainfall amounts of 1 to 3 inches, with isolated maximum totals of 5 inches, is expected over the Turks and Caicos, southeast Bahamas, and Jamaica. Rainfall amounts of 1 to 3 inches are expected across the Florida Keys. WIND: Tropical storm conditions are expected within portions of the warning area in the Dominican Republic and Haiti through tonight. Tropical storm conditions are expected within portions of the warning area in Cuba later today through Monday. Tropical storm conditions are possible within portions of the watch area tonight through Monday evening. SURF:Swells generated by Laura are affecting portions of the Virgin Islands, Puerto Rico, and Hispaniola. These swells are expected to spread across Cuba, much of the Bahamas, and the Florida Keys during the next few days. Here’s a satellite image of the Atlantic Ocean Caribbean Sea: Gulf of Mexico:

According to the NHC Advisory 15A…Marco is moving toward the north-northwest near 12 mph (19 km/h). A turn toward the northwest is expected later this morning. Marco is forecast to approach the coast of Louisiana this afternoon, and then turn westward and move near or over the coast through Tuesday. Data from the Hurricane Hunter plane indicate that maximum sustained winds have decreased to near 65 mph (100 km/h) with higher gusts. Fluctuations in intensity are possible during the next 24 hours, but Marco is forecast to weaken rapidly by early Tuesday. Tropical-storm-force winds extend outward up to 70 miles (110 km) from the center. HAZARDS AFFECTING LAND STORM SURGE: The combination of a dangerous storm surge and the tide will cause normally dry areas near the coast to be flooded by rising waters moving inland from the shoreline. The water could reach the following heights above ground somewhere in the indicated areas if the peak surge occurs at the time of high tide… Morgan City LA to Ocean Springs MS including Lake Borgne…4-6 ft Sabine Pass to Morgan City LA…2-4 ft Ocean Springs MS to the MS/AL Border…2-4 ft Lake Pontchartrain and Lake Maurepas…2-4 ft MS/AL Border to AL/FL Border including Mobile Bay…1-3 ft The deepest water will occur along the immediate coast in areas of onshore winds, where the surge will be accompanied by large and dangerous waves. Surge-related flooding depends on the relative timing of the surge and the tidal cycle, and can vary greatly over short distances. WIND: Hurricane conditions are expected within the hurricane warning area by midday Monday, with tropical storm conditions possible by early Monday. Tropical storm conditions are possible within the tropical storm watch area on Monday, and hurricane conditions are possible within the hurricane watch areas late Monday. RAINFALL: Marco is expected to produce rainfall accumulations of 2 to 4 inches with isolated maximum amounts of 6 inches across the Central U.S. Gulf coast through Tuesday. This rainfall may result in isolated areas of flash and urban flooding along the Central U.S. Gulf Coast. SURF: Swells generated by Marco are likely to affect portions of the northern Gulf Coast later today. These swells are likely to cause life-threatening surf and rip current conditions. TORNADOES: An isolated tornado will be possible early Monday morning near the southeast Louisiana coast. Latest satellite image of the Gulf of Mexico