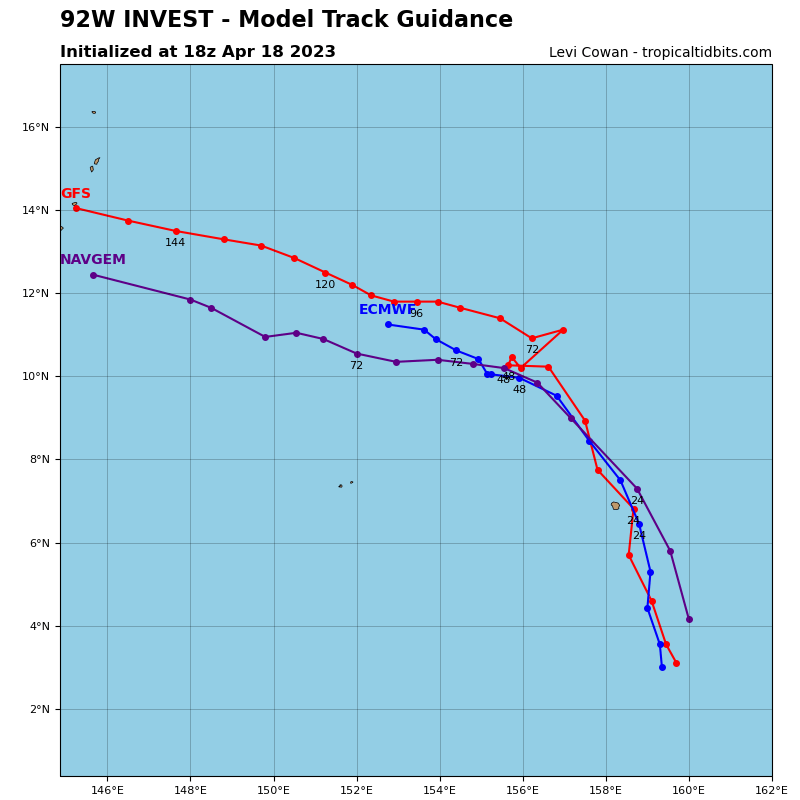 Near the Coast of Southern Mexico:

Disorganized showers and thunderstorms extending from the Gulf of Tehuantepec westward along the southern coast of Mexico are associated with a trough of low pressure.

This system is forecast to merge with another disturbance located farther west, and environmental conditions are expected to be conducive for gradual development over the next several days.

A tropical depression is likely to form by the middle to latter part of this week while the system moves slowly westward near the coast of southern and southwestern Mexico.

According to the JTWC Warning number 23, sustained winds were 85 knots with gusts to near 105 knots.

Animated enhanced infrared satellite imagery shows a medium-sized typhoon with a symmetrical deep central convection that appears to be weakening as it is undergoing an eyewall replacement cycle as evidenced by an enlarging eye.

Analysis indicates a marginally unfavorable environment with strong outflow and light vertical wind shear, offset by cooling sea surface temperatures due to upwelling brought on by the slow storm motion.

A mid-latitude shortwave trough exiting China via the Yellow Sea has weakened the steering ridge and allowed the system to track more northward. Behind the trough, a secondary ridge to the northwest is competing for steering causing the system to slow down.

After 48 hours, the ridge to the northeast will build anew and regain full steering and accelerate TY 14W north-northwestward. The marginally unfavorable environment will slowly weaken the system down to 85 knots by 48 hours.

Afterward, cooling sea surface temperatures in the East China Sea and into the Yellow Sea and increasing vertical wind shear will erode the system at a more rapid pace and by 120 hours TY 14W will be reduced to 30 knots, as it makes landfall over northeastern China near Qingdao.

According to the JTWC Warning number 6, sustained winds were 35 knots with gusts to near 45 knots.

Animated enhanced infrared satellite imagery shows the system has deepened and become more consolidated as poleward outflow into a tutt cell to the north has improved.

15W will continue on its current track under the steering influence of the ridge. After 36 hours, the low- to mid-layer of the subtropical ridge to the northeast will assume steering and drive the cyclone more poleward.

After 72 hours, TD 15W will crest the ridge axis and accelerate northeastward. The favorable conditions will fuel a steady intensification to a peak of 80 knots by 48 hours. After 48 hours, increasing vertical wind shear and cooling sea surface temperatures will begin to erode the system.

Concurrently by 48 hours, it will begin extra-tropical transition (ett) as it approaches the baroclinic zone. By 96 hours, 15W will complete ett and transform into a 70 knot cold-core low with an expansive wind field.

>>> There’s an area of disturbed weather, being referred to as Invest 92W which is located approximately 165 NM southwest of Iwo To, Japan

Animated multi-spectral satellite imagery and a himiwari 8 image depict a low level circulation (llc) with formative banding and deep convection in the southwestern periphery of the llc.

Global models are in agreement that invest 92W will track gradually southwestward and continue to intensify over the next 48-72 hours.

Maximum sustained surface winds are estimated at 18 to 23 knots.