An important flood early warning project in Vietnam moves into Phase II, aiming to increase the capacity of local disaster managers to save lives and livelihoods in the flood-prone country.

Deputy Executive Director Chris Chiesa and Southeast Asia Program Advisor Nathan Sage represented PDC at the August 24 launch of the U.S. Agency for International Development (USAID) Office of Foreign Disaster Assistance (OFDA)-supported Flood Modeling and Early Warning Capacity Development – Phase II (FEW2) Project in Hanoi, Vietnam. “PDC has been working with the Government of Vietnam since 2004 to enhance their capacity in disaster management and early warning processes,” Chiesa said, “We are very excited about this next phase of activity with the Ministry of Agriculture and Rural Development (MARD), and very appreciative of the support provided by USAID.”

The project will enhance the ability for central-level decision makers and provincial-level disaster managers to forecast flood events, assess their likely impacts, and reach those at risk with meaningful warning messages. These functions will be carried out using a web-accessed decision support system called VinAWARE, developed by PDC and based on PDC’s own DisasterAWARE platform.

For the FEW2 Project PDC will work directly with the MARD Disaster Management Center. PDC partners who will assist with the project include the U.S. Army Corps of Engineers (USACE), the Vietnam National Center for Hydro-Meteorological Forecasting (NCHMF) and the Vietnam Water Resources University (WRU).

Explore the longstanding relationship between PDC and Vietnam by way of these resources:

• An article about Dr. Nguyen Huu Phuc’s recent visit to PDC.
• The story of the Vietnam training curriculum developed by PDC, 2010
• Special training in the use of PDC’s DisasterAWARE was conducted in Vietnam
• News of PDC projects in Vietnam as of April 2010
• Visitors came to PDC as part of the Flood Early Warning Phase One project
• A description of the first use of the VinAWARE decision support system
• There are hundreds of pages about Vietnam at www.pdc.org, which can be found by using the
“Search this site” box, upper left on the home page.
• A fact sheet on International Capacity Development
• The story of the 2005 Landslide Workshop produced in Vietnam
• A Vietnamese intern gained professional experience at PDC in 2008
• The first Flood Early Warning Project launched in 2009
• To see what Dr. Phuc and the DMC are doing, go to www.dmc.gov.vn. 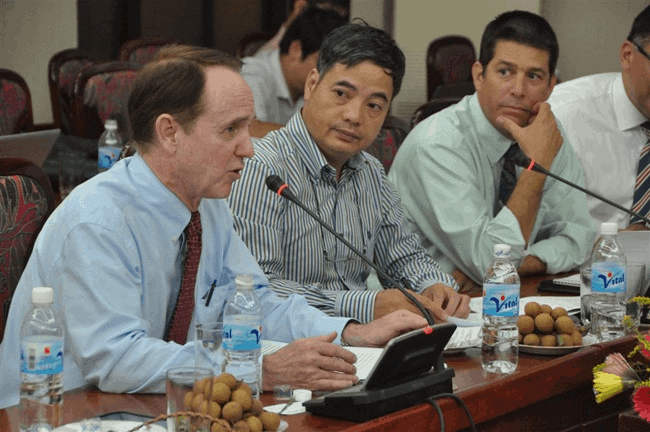